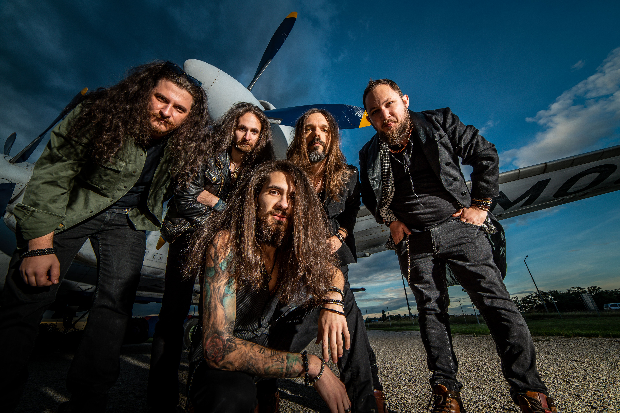 Big things are bristling on the horizon for Ripple Music’s, Ozone Mama! After releasing their critically acclaimed, best-selling album, “Cosmos Calling” with the California-based Record Label, Ozone Mama have continued to go from strength to strength.

Since the band’s record release show in February David Szeleczki has taken over vocal duties from the band’s former singer Marton Szekelys, and former session-keyboard player Laszlo Lukacs has stayed on to be full-time member of the band, adding his layers of organ to the bands earthy mix.

Now a five-piece, the band is about to break their recent silence. After debuting their new vocalist at three gloriously successful festival appearances in Hungary in July, under the direction of main songwriter-guitarist Andras Gabor Ozone Mama will launch a full-scale tour through nine European countries including Slovenia, Romania, Sweden (Ripple Fest Sweden 2018), Austria, Switzerland, France, Spain, Italy and Hungary.

On changing vocalists, Andras says, “It’s been a long journey with our singer Marci. Lots of gigs, miles, and laughing. But sometimes roads diverge and people travel in different directions. Ozone Mama wishes Marci the best of luck. He will always be our brother. But for now, we looks forward to an exciting new era in the band’s history. With our new singer, David, and Laszlo on keyboards, new blood has been injected into the veins of the band and we’re excited to see where this leads us musically, and personally. Also, we’re thrilled to announce that we’re playing in nine countries this autumn, including RippleFest Sweden II. It’s such an honor to have been invited to play. We’re ready to spread the word loud and proud that not only does Hungary have rock bands with potential, but our label Ripple is one of the best underground stoner rock labels in the industry today. It’s like a big family, and we cannot wait to meet some “family members” in Stockholm soon!”

Cranking out a bristling brand of high-octane rock n’ roll, Ozone Mama hails from Budapest with a vintage sound reminiscent of the 60’s or 70’s yet swaddled in a modern vibe. With their debut album (‘The Starship Has Landed’) they won a Phonogram Prize in 2012 . Their second release, ‘Freedom EP’, released in 2013 received major play across European, American and Canadian radio stations and their song ‘I Really Care’ was featured in Classic Rock Magazine . While their 2016 release “Sonic Glory” was awarded the Fonogram Prize in the category of “Hard Rock or Metal Album of the Year”

After joining forces with industry leading heavy rock label, Ripple Music, the new album “Cosmos Calling” hit the streets in January of 2018 and can be heard on the Ripple Music bandcamp, spotify, apple music, amazon or found in vinyl or CD at the Ripple Music webstore or any number of record stores.

As the band prepares to lay a swathe across Europe, look for the rest of the world to start talking about Ozone Mama.