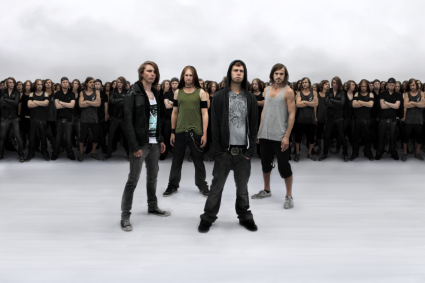 Brighton’s high energy electro-metallers COLLISIONS will be kicking off the holiday season in wild style when they play their final show of the year on 20th December at Oxford’s O2.

But that is merely the prelude to a busy 2015 that the boys have in store.

As they are out on a full UK tour to celebrate the spring release of their hugely anticipated debut album ‘The Cause And The Catalyst’.

The band will be promoting the album with tour dates across the UK and are looking at rattling a few festival stages with their storming live set over the summer.

The spring tour dates are guaranteed to be absolutely blistering shows as alongside COLLISONS will be the fabulous CYPHER 16, RSJ and SEETHING AKIRA. A case of get yourself down there, light the touchpaper then stand back and watch the explosion of sound that follows!!

Since forming in 2011, the Brighton four-piece have been filling dance-floors across their home town with a refreshingly unique, high-octane fusion of metal, punk, dubstep and drum & bass. Support slots with the legendary Senser, Hed PE, The Algorithm, Hacktivist Spindle Sect and a slot at the Breakout Festival, requested by Skindred themselves, has firmly established COLLISIONS as a must see band.