Our Last Night Get More Nights In The UK 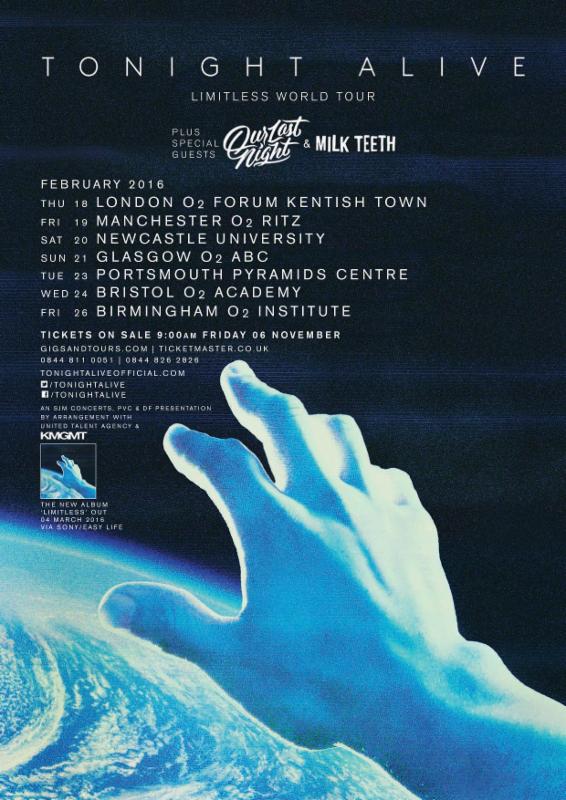 Tour announced with Tonight Alive for next year

Our Last Night is thrilled to announce a string of UK dates with Tonight Alive. The tour kicks off February 18th in London at the Forum Kentish Town and continues to travel across the country hitting major cities such as Manchester, Glasgow, and Bristol. Tickets are on sale now and can be purchased at gigsandtours.com or ticketmaster.co.uk!
With a European tour wrapping up this week, The American Post-Hardcore group Our Last Night(Trevor Wentworth, Matthew Wentworth, Alex “Woody” Woodrow, Tim Molloy) are gearing up for a tremendous US tour leading them well in to December. The Younger Dreams’ USA tourfeatures special guests Palisades, Hail The Sun, and Picturesque. The tour kicks off November 11th in Orangevale, California. Tickets are on sale now at: OurLastNight.com.
Our Last Night had a tremendous summer with the release of their self produced/mixed/mastered fifth studio album, Younger Dreams (which debuted at #1 on the Heatseekers new artist chart and #17 on the Rock chart) and an exhilarating run on the 2015 Vans Warped Tour. Off of their hit album, Younger Dreams, the band unveiled three music videos, including “Home” and their follow up, “A World Divided”. In a world where uniqueness is often overshadowed by the norm, in “A World Divided”,  Our Last Night are breaking the barrier. With lyrics “We need to break the cycle of hate,” this do-good band is ready to set the mold on what should be accepted in our society. “A World Divided” is a song for those that fight everyday to showcase their own skin, those that are not afraid to step out of bounds, and a declaration that Our Last Night are ready to build a movement of acceptance. Matt and Trevor Wentworth were executive producers and the sole directors of this music video. And finally a more comical video, Our Last Night, released “Rode To The Throne” last month.
Fans can head over to OurLastNight.com to purchase Younger Dreams!
Tour Dates/Tickets @ Ourlastnight.com/tour
Facebook
YouTube
Twitter
Instagram: @OLNBAND
Previous article
Go Tell The Congregation
Next article
Rummaging In The Lost Property