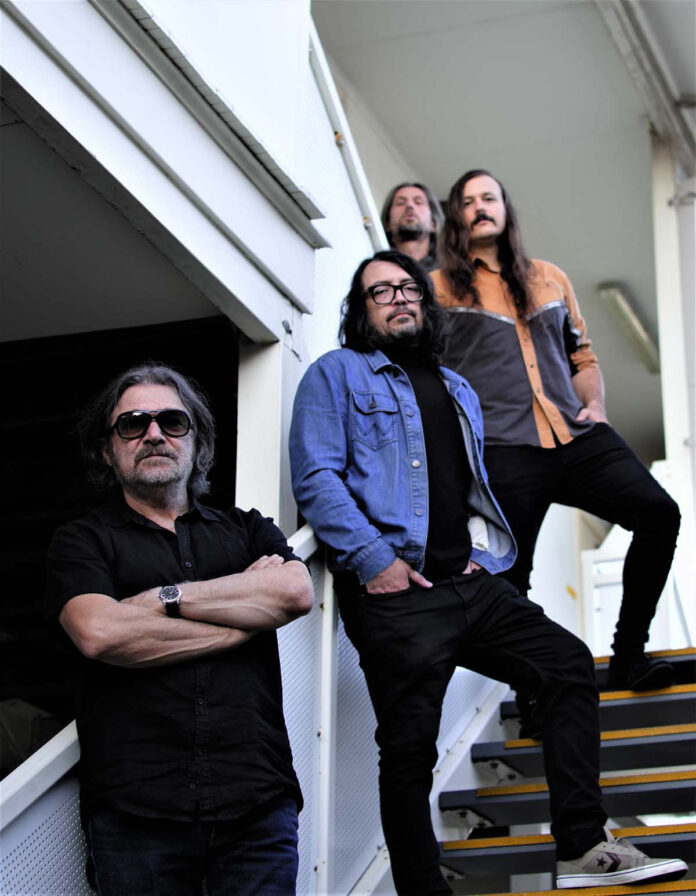 Internationally acclaimed Perth band Datura4 – the current outfit of iconic Perth rock’n’roller Dom Mariani of The Stems and Someloves fame – had the honor last week of having their new single “Open The Line” chosen as “The Coolest Song in the World” by Bruce Springsteen’s righthand man Stevie Van Zandtaka Little Steven on his influential and much-loved rock’n’roll radio channel on SiriusXM, The Underground Garage. Dom, who is a long-time favourite of Stevie’s, was also interviewed on the channel on their weekly “Coolest Conversations” spot.

“Open The Line” was also featured in Classic Rock magazine’s Tracks of the Week, where it came in second behind Pink Floyd (and ahead of Jack White) in a readers’ poll.

“Open The Line” isthe first single from Datura4‘s new Neanderthal Jam LP which will be released August 5 on Alive Naturalsound Records. Mariani sheds a bit of light into the making of the track: “It’s one of those songs that came together with very little fuss. Our drummer, Warren Hall, had the drum groove initially from what started out as a casual jam at his home studio in the Perth hills. The rhythm invites you in to dance to the music so to speak, we had fun putting it together and it slotted in well amongst the heavier/darker tunes. The message of the song is a universal and simple one, ‘love is the only answer.’ It’s easier said than done, unfortunately, but something I think we can all agree with. The group vocal, Bob’s Hammond organ, the fuzz guitar riff and the cow-bell really seals the deal.”

***Dom Mariani of legendary Perth garage rockers The Stems is a man of many muses. While tearing up the Australian Alternative charts in the late ’80s with such ’60s-inspired Stems classics as “Tears Me In Two” and “Love Will Grow” and their sole album, the classic At First Sight, Violets are Blue, Dom was also dabbling in instrumental surf music with the Stonefish and contemporary power pop sounds with TheSomeloves. The power pop flame kept burning with the DM3 in the ’90s and beyond,  and then Dom expanded his instrumental pallet with TheMajestic Kelp in the new millennium,  around the same time that The Stems reunited at the request of Bruce Springsteen’s pal Steven Van Zandt. Steven had The Stems play his Little Steven’s Underground Garage Festival in New York alongside the likes of Iggy & The Stooges and TheNew York Dolls.

While TheStems occasionally jump on a plane and hit the road in Europe or somewhere – with fans Davey Lane of You Am I and Ashley Naylor of Even now ensconced as permanent members – Dom has found a new musical focus in his current band, Datura4. While Dom’s other bands have more or less focussed on music with a ’60s influence, with Datura4, Dom has moved into the ’70s. Indeed, Dom has progressed back to his early teen years – the early ’70s – when he would dig the heavy and progressive blues sounds of the likes of Led Zeppelin, Ten Years After, Groundhogs and Aus bands like Carson, Chain, Billy Thorpe & The Aztecs and Perth locals Bakery. He’s even added an authentic ’70s blues-rocker to his band – keyboard player Bob Patient (who has actually worked with Dom on various recordings over the years)  is a one time member of heavy prog. rockers Fatty Lumpkin and more recently a sideman of Perth’s internationally revered slide guitarist Dave Hole.

Beginning with Demon Blues in 2015, Datura4 have released 4 acclaimed albums for revered LA label AliveNatural Sounds Records (original home of the Black Keys!), and they’re now set to return with their highly anticipated fifth album, Neanderthal Jam. Neanderthal Jam is eleven new tracks of psychedelicised blues and full-tilt heavy rock that were jammed out and recorded at their favourite south-west farmhouse studio during the early months of 2021. It sees them building upon and going beyond on another diverse collection of songs.

Album opener “Going Back to Hoonsville” gets things started with a relentless and pounding swing to get your hot wheels on. The jam is well and truly underway, and so the boogie gets heavy pursuing love in an inner sanctum on “Secret Society” until the joyous organ groove of “Open the Line” invites us to dance to the music.

“Bad Times” digs in on their OZ rock roots with a groove that the ‘Tatts’ (Rose Tattoo) would be proud of. “Black Speakers” and title track “Neanderthal Jam” keep the jams cooking with Bob Patient‘s keyboard playing prowess on display proving what a welcome addition he has been to the band. An acoustic prelude that is “Hold My Life” that leads into a pummelling boogie riff on “Worried Man’s Boogie” sets the scene for personal concerns about a world and the times we find ourselves in.

Full-throttle rocker “Digging My Own Grave” turns the lights to ‘black and purple’ and the Witchdoctor takes us for a ride on “Fish Fry” until we get to the epic sun-kissed west coast highway closer “Dry-By Island”.