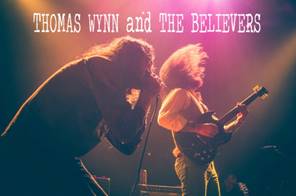 Thomas’ spirit-moving vocals, passionate lyrics, and emotional delivery are uniquely supported by sister Olivia’s engaging and captivating voice and presence. Her strong vocal harmonies and wide-eyed response is the perfect companion to her brother’s yearning banshee cries. Hailing from a musical family, the siblings are heavily influenced by their father, Tom Wynn, the original drummer of the country-rockers Cowboy.

TW&TB has delighted audiences of all sizes, whether in intimate settings or major festivals, and shared the stage with the likes of Cheap Trick, Gov’t Mule, Blackberry Smoke, Medeski, Martin & Wood, Jason Isbell & The 400 Unit, New Riders of the Purple Sage, and more. They are currently in the studio recording their third album, to be released early 2017 – the follow up to their 2012 release ‘Brothers and Sisters.’

Thomas Wynn and The Believers: