New York looks to a retro future  with Handsome Jack 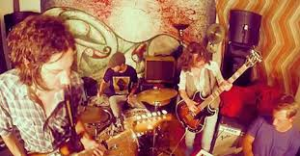 If anyone is missing some blues-infused garage rock in their lives, then allow me to accquaint you with New York quartet called Handsome Jack.

It’s possible that despite their brilliance you may not have actually heard of them before, particularly in Europe.

The band formed as young whippersnappers a decade ago in their hometown of Lockport, New York and have been building up a following ever since.

Their MO leans towards the more soulful end of the blues-rock spectrum but they are not without power and swagger.  they have cut their teeth with support slots with the likes of Gov’t Mule, J. Geils, The Hold Steady and Robert Randolph.

They released a few EP’s in there formative years and the debut album finally landed in 2011.  Supermoon received rave reviews and their new album is set to do exactly the same and bring them to a wider audience.

Do What Comes Naturally has just been released on CD, digital and limited edition coloured vinyl through Alive Naturalsound Records.

Those fine folk at Classic Rock have put the band’s new album up for streaming so you can try before you, inevitably, buy.  Click on the link below and get some Handsome Jack in your life.