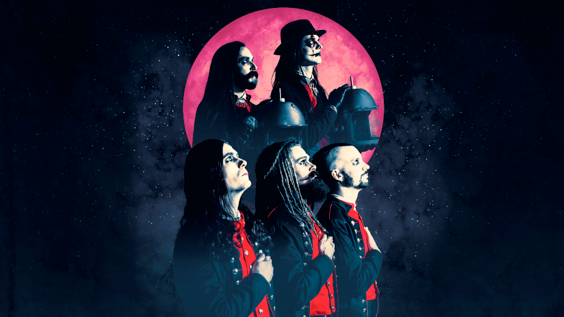 AVATAR of Sweden have released a statement on the recent discovery of TRAPPIST-1, also designated as 2MASS J23062928-0502285. The band plans to visit the newly named solar system immediately.

“The ‘New Land’ mission will focus primarily on finding life and sustainable living conditions,” says His Royal Majesty King Kungen. “Secondly we will look for harvestable resources such as various types of metal, lead, copper, zinc, thrash, death… that sort of thing. How do I turn this off? I’m thirsty! Where is my mead? And where are your pants? Wait, is this thing still recording?!”

As of today, it has been reported that the dwarf star has been shown to host seven terrestrial planets, a larger number than detected in any other planetary system. “The mission will be aired LIVE on AVATAR Country state television, KTV (Kungliga Television). For people abroad, unable to watch the event as it is happening, a summary can be seen on AvatarVEVO today. Glory to AVATAR Country! Glory to our King!”

Check out their journey to the “New Land” here: http://vevo.ly/gvFki9

Upon mission completion, AVATAR will return to earth to embark on a North American tour supporting In This Moment and Motionless In White on the aptly named ‘Half God Half Devil’ Tour. Afterwards AVATAR will make appearances at a number of highly coveted hard rock festivals in Europe this summer:

AVATAR released their very first concept album titled “Feathers & Flesh” last year via Entertainment One (eOne) in North America and Canada with Another Century/Century Media Records releasing the record in the rest of the world. The new release was the band’s highly anticipated follow-up to “Hail The Apocalypse” released in 2014.

The aim is set higher, further and deeper than ever before for AVATAR. Not only is this concept album their most extensive work to date, showing the widest range of any of their albums, it also contains a story too extensive for any booklet, so they made a book. A fully illustrated 60 page, 109 verse poem hardcover book. “Feathers & Flesh” was recorded in Germany, Finland and Sweden in December 2015 with producer extraordinaire Sylvia Massy (System Of A Down, Tool, Red Hot Chili Peppers). “AVATAR is an amazing band,” said Massy, adding, “The singer has the wild energy and charisma I love, and the players are relentless. The album we’re making is an epic. Each song powerfully stands on its own, but is only a piece of a larger story. This album is the project I’ve been dreaming about for years!”

Previous article
The Beginning Of The End
Next article
MV Meets: Monster Truck