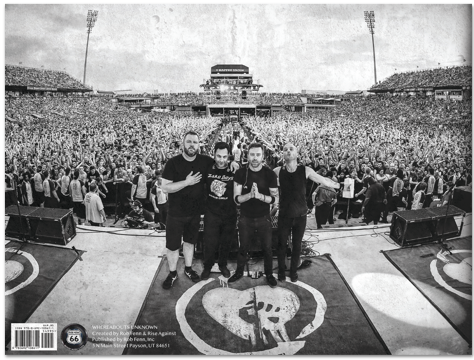 Fenn has chased the band all over the world documenting life on the road with Rise Against and their rabid fans to provide a unique glimpse of a band that for 18 years, has kept its moral compass steady, using their international punk platform to speak out for social justice.

Lead singer Tim McIlrath says about the book: “I wish we could bring all our fans on the road with us, to take them with from city to city and see what an amazing global community they are all a part of. To help show you what we mean, we bring you WHEREABOUTS UNKNOWN. After meeting photographer Rob Fenn and seeing his visceral photos, we realized he has the eye and enthusiasm to capture and attempt to harness some of the energy and passion that we ride from show to show.”

About Rob Fenn
Who the F#@K is Rob Fenn? According to Taylor Momsen of The Pretty Reckless he is “The VISUAL SOUL of ROCK & ROLL!” Since beginning his photography career in 2009, Fenn and the gritty soles of his Converse sneakers have toured all over the world, spanning 33 countries including Russia and Japan.
Learn more about Rob Fenn at www.RobFenn.com