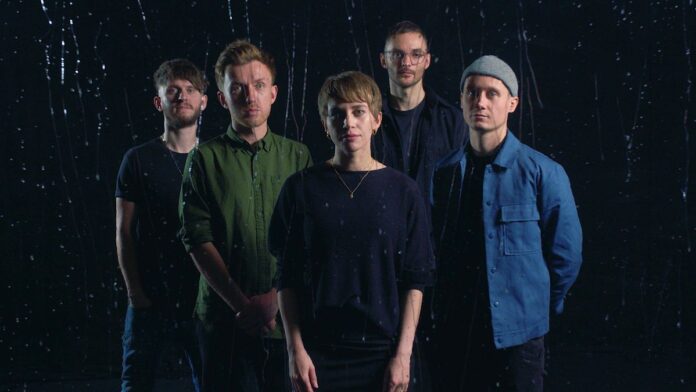 ROLO TOMASSI will be releasing their brand new album ‘Where Myth Becomes Memory’ on February 4th through MNRK, pre-order – HERE

Brand new single and video ‘Drip’ is out now, watch the video – HERE

The band have already announced a full UK and EU headline tour for February 2022, with support from Pupil Slicer. Tickets on sale
now – TICKET LINK

ROLO TOMASSI will release their huge, expansive and ambitious, brand new album ‘Where Myth becomes Memory’ on February 4th 2022 through MNRK. The band, who are currently gracing this weeks cover of Kerrang! (read that cover feature – HERE), returned in August with the single ‘Cloaked’, their first new music since 2018’s ‘Time Will Die And Love Will Bury It’. The band today also release a brand new single and video ‘Drip’, which is out now on all streaming platforms. Watch the video – HERE

You can check out all the brilliant ‘Where Myth Becomes Memory’ pre-order bundles, vinyl variants, album + live show ticket bundles and more – HERE

ROLO TOMASSI have spent 17 years leading the pack rather than following and ‘Where Myth Becomes Memory’, sees them lead with more poise and determination than ever before. The new album serves as the final part in an unintended trilogy that began with 2015’s ‘Grievances’ and continued with 2018’s ‘Time Will Die And Love Will Bury It’, the most critically acclaimed album of the band’s career, up to now. Every ROLO TOMASSI album shows signs of growth, but ‘Where Myth Becomes Memory’ serves as a culmination of a period of creativity that has exalted ROLO TOMASSI to their loftiest status so far as a band, with a singular vision where the most savage, unhinged sonics can co-exist harmoniously with epic cinematic elegance and grace.

Describing exactly what ROLO TOMASSI do and how they do it has always been incredibly difficult. Atmosphere is created through brutal and punishing guitars, with abrasive vocals at war with all around them, taking no prisoners and bending to no one. And yet, it is also created through a constant feeling of calm, reflection and intimacy, almost washing over the listener like welcome waves through sparse, skeletal piano, genuinely haunting melodies and melancholic musical reflections. A song like new single ‘Drip’ (possibly one of the most exciting and forward thinking singles to be released this year) drags the listener into a barrage of excitement of noise, hope, dreams and feelings of optimistic caution. It’s astounding, and unlike anything else you will hear.

Guitarist Chris Cayford explains a bit about the importance of ‘Drip’ “When we start the writing process for each record, we always wait for the first song that clicks. It feels similar to our music but is also intangibly different to the extent we know it’s the next step and we need to build the album around it. This was the song that did that”

‘Where Myth Becomes Memory’ is filled with these beguiling journeys, with moments of non stop aggressive motion like ‘Prescience’ sitting besides the cinematic, broken down and bare emotion of ‘Stumbling’. Or (possibly) the album’s heaviest and most direct song ‘Labyrinthine’ giving way to the album’s true centre-piece, the stunning ‘Closer’, which feels like an album mid-way warm blanket of sadness, love and hope. At each turn, when you think you have this album figured out, the band decide to take a different turn, a more interesting path, and it is all the better for it.

“This is a really important album for all of us,”explains James (Spence), “Of anything we’ve done, it’s the one I’m most proud of. I think it’s the most ambitious and creative that our band has ever sounded and something that we’ve all needed to get through the last few years. We can’t wait to share it and to have you help us bring it to life.”

Live wise, ROLO TOMASSI will be playing a sold out, hometown show at Chalk in Brighton on November 12th, they have also already been announced on next years Complexity Festival on 12th Feb 2022 in Haarlem, Netherlands AND at next years 2000trees Festival (as a UK festival exclusive for 2022). The band have also announced a full UK and EU tour for February 2022, which includes their biggest headline show to date, at Oval Space in London. Tickets for all dates are on sale now.

Full list of all ROLO TOMASSI UK and EU dates are below, support on all dates
will be Pupil Slicer: Tickets can be bought – HERE