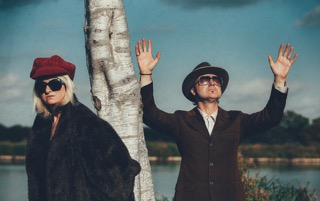 For what began as something of a side project in 2011 for husband and wife Michael Weston King & Lou Dalgleish, My Darling Clementine is now very much centre stage with 4 albums, over 400 shows across Europe and N. America, some ingenious musical collaborations, accolades and awards, and an ever growing fan base with a genuine love of their music.
The duo released their fourth album Still Testifying last summer, musically taking them another step away from the classic country / country-politan style evident on the bands debut How Do You Plead? 2013 saw the release of follow up album The Reconciliation? featuring Richard Hawley‘s team, as well as that iconic Texan Kinky Friedman, which hinted at a more soulful direction; whilst 2015 saw a story and song collaboration with crime writer Mark Billingham, The Other Half, which included an album, audio book and a live show.
Still Testifying shows that My Darling Clementine have seamlessly arrived at their destination.  The pedal steel has been joined by horns, the twang has given way to wah-wah & groove guitar, and the fiddle replaced by strings. This is more Delaney & Bonnie than George & Tammy, revealing a further move away from classic country as they embrace Gospel and Country Soul, channeling the likes of Dan Penn, Micky Newbury, Goffin & King and Bacharach & David.

Still Testifying may have been recorded in South London over the summer of 2016, but the warm southern winds of Muscle Shoals, Alabama, and New Orleans, Louisiana were clearly blowing along Tooting High Street, straight into the Gold Top Studio. And yet, the English north wind doth also blow, down from the Lancastrian and Yorkshire moors.