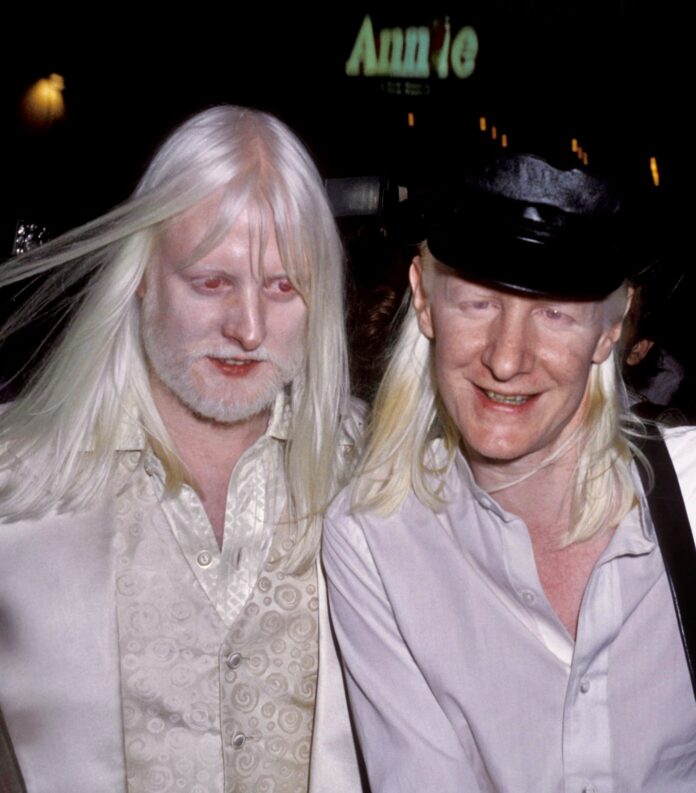 Brother Johnny is a powerful sonic journey, traveling the course of Johnny’s musical life, impeccably directed, as only his brother Edgar could.  As American Songwriter describes, “The generous hour and a quarter collection is packed with rugged, mostly rocking, and energized performances, clearly emotionally motivated, displaying the contributors’ love of the songs, vocals, and playing that made Winter’s blues based attack so iconic.”

The guitar-driven album celebrates the expansive styles Johnny was known for – the 17 tracks were carefully curated by Edgar and producer Ross Hogarth to represent Johnny’s evolution as an artist, honouring his great legacy while also incorporating a personal tribute from brother to brother, and for which Edgar penned two new songs.

Three singles were released in advance of today’s album release. The fourth focus track is Johnny’s tender and revealing “Stranger,” whose emotional resonance is further enhanced by the touchingly beautiful voice of Michael McDonald (vocals), Joe Walsh (lead guitar), and Ringo Starr (drums) who join Edgar (on piano, mellotron, and synth), Tim Pierce (electric and acoustic guitar), Bob Glaub (bass) and Kenny Aronoff (on percussion).
“I absolutely love this ballad, partly because it is so uncharacteristic of Johnny’s style and image. It is on the soft side, very melodic, and sensitive, displaying a vulnerability Johnny does not often reveal,” explains Edgar.

Brother Johnny is available on CD and digitally across all platforms today, April 15, 2022. Double 180-gram vinyl will be available in mid-June 2022.

The second single, “Mean Town Blues,” was released February 18, 2022, just before February 23, what would have been Johnny’s 78th birthday and features Edgar Winter singing, Joe Bonamassa on slide guitar, Sean Hurley on bass, and Gregg Bissonette on drums. Listen to it here.

The third single was “Lone Star Blues,” was released on March 18 and features Edgar Winter and Keb’ Mo’, a perfect pairing for this personal and biographical song Edgar penned especially for this tribute. See the visualizerhere and listen here.
STRANGER, from Edgar Winter’s liner notes for Brother Johnny:

This is a ballad called “Stranger” that I absolutely love, partly because it is so uncharacteristic of Johnny’s style and image. It is on the soft side, very melodic, and sensitive, displaying a vulnerability Johnny does not often reveal. This is the track Joe Walsh really wanted to play guitar on, which he did so beautifully (in addition to joining in with his great vocal on “Johnny B. Goode”). It reminded me so much of when I used to sing that song with Johnny. The guitar on the ballad is so perfect for the song. It’s classic Joe –  all heart, so sensitive, and really full of emotion. Thank you, Joe, for your Rockin’ vocal on “Johnny B. Goode” and your great guitar vision on “Stranger”.
The vocal on this one is sung by one of my absolute favourite singers on the planet. This was my wife Monique’s suggestion, I’m talking about the incomparable Michael McDonald. Our friendship goes back to the early 80s when Michael (much to my surprise) invited me to play in his first solo band after the Doobies, and also on his debut solo album “If That’s What It Takes”.  We also did a Japanese tour with that band. It was a three act show—Michael McDonald, Joe Walsh, and Boz Scaggs. What a line-up!
This was one of the most exciting, and inspiring periods of my life, and one I’ll never forget. Now I have the joy and feeling of things having come full circle, with us both having played or sung on each other’s albums. Michael’s vocal is pure magic, hauntingly beautiful, intimately personal, and so real as only his voice can make it. Michael, thank you, Thank You, THANK YOU! You’re not only a Doobie brother, but a Blues brother, and a Soul brother.
But wait, that’s not all. As a very special guest on the drums we have The Greatest! (Who else, of course, it’s Ringo Starr)! I met Ringo back in 2006, and had the great honor of playing in his All Starr band for the first time that year. I was invited again in 2008, 2010, and 2011. It was literally the thrill of a lifetime being on stage with the incredible Ringo Starr and so many other great musicians in his All Starr Band.
I Love Ringo! Who doesn’t? Both as a musician, and as a human being. You can go anywhere in the world, mention the name Ringo, and you’re sure to get a smile. Along with his great music, his advocacy and outreach to bring Peace and Love into our hearts is truly a gift to the world. As a matter of fact, in the heart of Beverly Hills there is a Peace and Love Sculpture of Ringo’s hand giving the peace sign. It stands in Beverly Gardens Park just opposite City Hall as a reminder of Peace and Love.
Another Love connection—Ringo’s wife, Barbara’s sister (Marjorie) is Married to Joe. That makes them brothers in law, and obviously very close. Monique and I, knowing this, and our all being friends—we thought it would be especially cool to have them both on the same track together. So I asked Ringo and he said yes, I’ll do it for you. I felt so honoured. He did it in his home studio (where he has all his drums set up) and we want to thank Bruce Sugar here for his engineering, overseeing the session, and making it happen. It was another full circle, since I have played on several of Ringo’s albums. Thank you, Ringo. You are The Greatest! Peace and Love.
We also want to thank Tim Pierce for his beautiful acoustic guitars doing the rhythm. Yeah, Tim! I Love that lush wall you created.
The final touch was light percussion—once again done by the rhythm-master, our friend Kenny Aronoff. Thanks again, Kenny. It’s especially cool to have you on this one, in the midst of such amazing company.
So, Michael McDonald, Joe Walsh, and Ringo Starr. What an interesting, diverse, and unique combination. And if you think it looks good on paper, just wait til you hear it.

Previous article
HELL, IN THE UK
Next article
STRIKE IN THE BALLS