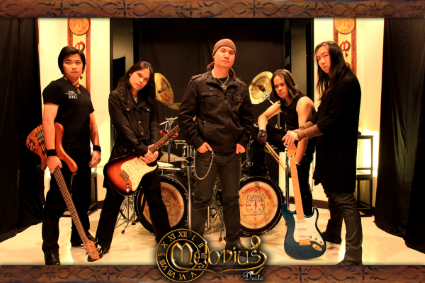 From Thailand, record label in Poland, this symphonic metal band are used to travel

Melodius Deite is Melodic Progressive Power Metal from Thailand, for fans of Angra, Dream Theater and Symphony X or classical stuff like Bach, Mozart, Beethoven and Stravinsky. Their magnificent composition and Symphony Orchestral arrangements are well combined with Power Metal.

All members are still active. They were signed by Inazuma Productions, a European label, from Poland. The band’s works is distributed worldwide in both Physical CDs and Digital Download, for example; in Japan by Disk Union store.

Previously, their debut album, “Dream On” was signed by Avatarn Records from Netherlands. The name of the band was still “Melodius” at that time. Lately in 2014, they released their second full album “Episode II: Voyage Through the World of Fantasy”.

The magnificent composition and Symphony Orchestral arrangement was well combined with Power Metal music by the exclusive skills of the band. The first album was emphasized on the catchy, beautiful and powerful melody in Melodic Power Metal style. In the second one, the band has developed their skills in all aspects; more delicate composition, more elegant arrangement, more complex music and stories, a much better production and more experienced skills of each member have been shown. This is thus a real progress of the band. The second album was produced and published in Europe and it was mixed and mastered by Karlin Studio in Poland