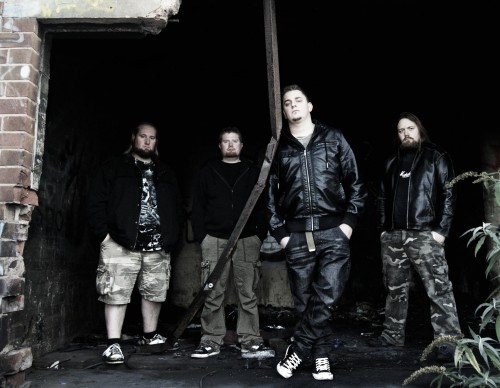 The band goes back to the founder’s high school days when Baz (guitars), Paul (drums) and Jeffsy (bass) formed the basis of the band in 2001. Having added a couple of further members in the formative years, by early 2005, the line-up was stripped back to just one guitarist, Baz, whilst Matty J was added as frontman and vocalist, and the band’s current groove-laden sound was conceived.

In March 2007 the band signed with Casket Records and went on to release their self-titled debut in 2007 and “Damned Eternal” in 2012. They played extensively in support of these two releases building a solid reputation across the UK, sharing the stage with the likes of Sepultura, Crowbar and Arch Enemy.

Mark Appleton, label manager at Rocksector said “We first saw Obzidian playing live in Manchester and they immediately impressed. Later when we heard the early mixes of the album we were struck by the extraordinarily tight brutal sound which is clear, concise and immense. They’re an exciting prospect for the label and we relish the opportunity to work with them”

Our review of the album will be published on Thurday and the band play Fixxion Warehouse, Wolverhampton on Saturday