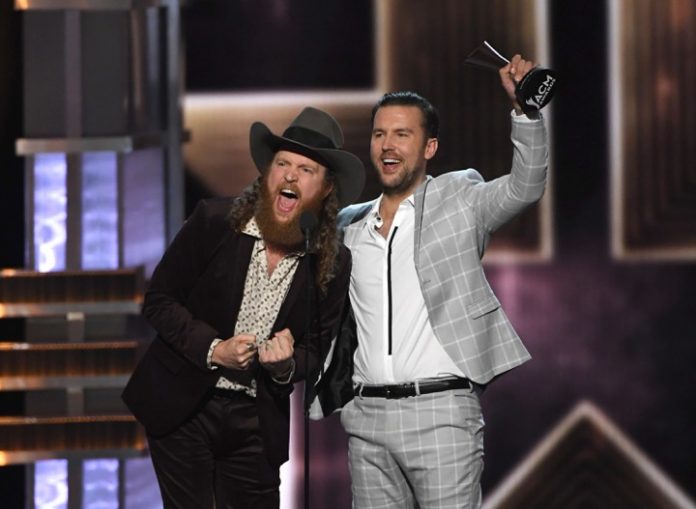 Nashville-based act Brothers Osborne achieved huge success at the recent  52nd annual Academy of Country Music Awards in Las Vegas, NV, picking up not one but two awards as the country music world celebrated one of its biggest and most prestigious nights.

“We have the best seats in the house, I don’t even know how we got invited to sit up front!” joked TJ. “We’re sitting there the whole time behind Thomas Rhett and he left and I was like, ‘well there goes our air time’. Anyhow, our parents are here tonight and we want to thank them because, honestly, they believed in us by the time we were babies.”

News that they’d won the award for ‘New Vocal Duo Of The Year’ was announced in March, when the band learnt of their victory whilst onstage at Dingwalls in London, performing their first ever headline UK show to a sold-out crowd.

These two wins follow a memorable year in which the Brothers‘ debut album, ‘Pawn Shop’, and singles ’21 Summer’ and ‘Stay A Little Longer’ have enjoyed considerable US success, and now sights are set on the international market with ‘Pawn Shop’ being re-issued via Spinefarm Records complete with special packaging and bonus content; this new UK version of the record was issued in support of the duo’s anticipated appearance at Country2Country – the largest country music festival in the UK.

Recently, Brothers Osborne also enjoyed wins and nominations at the 2016 CMA Awards and 2017 Grammys, along with massive tours in the US with the likes of Miranda Lambert.

Looking ahead, they will be playing two shows in April as support for Tim McGraw and Faith Hill’s Soul2Soul World Tour, before joining Chris Stapleton on his All American Road Show in May.