Nothing’s Better Than Home For Beth 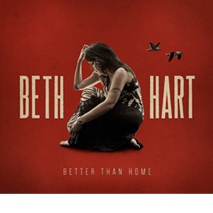 The woman that “lives the Blues” is back

Her incredible voice has already moved guitar legends Jeff Beck, Slash, Joe Bonamassa and Buddy Guy to perform with her on records and live; making her, in the words of Classic Rock Magazine “guitarists go-to girl and the UK have firmly taken Beth to their hearts after recent stirring headline performances at the Royal Albert Hall, The Roundhouse and Hampton Court Palace.

Some artists choose to sing the blues and some artists find that they have to live them as well; the latter couldn’t be more fitting for Beth Hart. A prodigious talent in her childhood she’s been through more than most; FBI raids, her father going to jail, her sister died of complications from AIDS, expelled from school, she ran away from home to Brooklyn aged 15 to fulfil her dream of performing live. Scouts picked her up and she won $100k on Star Search beating a young Beyonce to claim the prize. Her break-through single ‘LA Song (Out of this Town)’ later became a hit reaching #6 in the US.  Pressure and a “dark period” hit; drink, drugs and an eating disorder followed – but performances on the Jay Leno and David Letterman shows grew her public profile. She spent the following years either on tour or in and out of rehab. In 2000 she confessed to being “nuts and struggling” and was diagnosed as Bipolar; doctors told her “you can’t handle this life in the music industry”, she was to prove otherwise.

Now on her 7th solo record, album collaborations with Joe Bonamassa, ‘Seesaw’ and ‘Don’t Explain’, made it to the top #1 and #3 of the Billboard  Blues Albums Chart whilst ‘Live in Amsterdam’ entered the UK album chart at #18.  Her greatest validation as one of the defining voices of our time came when her tribute (alongside Jeff Beck) to Buddy Guy on The Kennedy Center Honors Special received one of the only 2 standing ovations of the evening, led by President Barack Obama and his wife, Michelle. She has also worked with Guns ‘n Roses guitar maestro Slash on ‘Mother Maria’ from his album ‘Slash’.

The producer of The Kennedy Center Honors, Michael Stevens, and the musical director, Rob Mathes, saw what people have been seeing for nearly 20 years: a woman who wears her soul on her sleeve and has the pipes to back it up. Michael and Rob decided to produce her new album, ‘Better Than Home’.

What makes ‘Better Than Home’ her most intimate work ever, is that it goes to the depth of her soul, revealing terrible pain in her past, family issues and personal demons as well as her coming to grips with them and using that knowledge to find the real beauty in her life. No words do a better job of summing up what this new album is all about, than the lyrics to the title song, Better Than Home.

I am not afraid or lonely; I am not chasing the ghost of the past

Now Beth’s putting her past behind her, embracing the great things she’s done and the good things she has and looking forward such as on ‘Mechanical Heart’, which is a powerful love song to her husband, Scott Guetzkow.  “It was my way of saying”, she admits, “yeah, I don’t have a healthy or normal heart, but I’m going to figure out a way to bring you everything you need and want in life.” Whilst ‘Trouble’ is“a brass balls song…about a female who says, ‘Hey, I didn’t come here to make trouble, but the bottom line, it’s a whole lot of fun.’  It’s a bad girl song.”

In ‘We’re Still Living In The City’, she chronicles two peoples’ lives by their marriage together.  “They’re going through life…this rollercoaster.  But the one thing that’s always constant between them is…no matter what, I’m still crazy about him!”  ‘St. Teresa’ is an anthem with a unique point-of-view, narrated by a man in prison.  Inspired by the film, Dead Man Walking, she adds; “There’s this man, who knows everyone hates him, and there’s this woman, who’s very close to God, and she will love him and be devoted to him no matter what.”

‘As Long As I Have A Song’ is a stirring ballad that “represents my love and hate about being a songwriter.  What I love about it, it’s connecting, but, out of the blue, it can all go away.  You’re searching to get reconnected, and out of writer’s block.” Beth isn’t afraid of admitting her own shortcomings.  Mid-tempo ‘Might As Well Smile’ is a soulful reminder of that.  “You’re taking yourself too seriously, just smile, relax and just get through the tough time.”

‘Tell ‘Em You Belong To Me’ is one of the most personal songs on the album.  “This is about my relationship with my father.  When I was a kid, my Dad and I were as tight as can be.  Then he married this woman who would not allow me to have anything to do with him.  It’s the story of ‘You tell that lady you’re my Dad.’ ” Showing a lighter side on ‘The Mood That I’m In’.  “It’s a fun song.  It’s about love, it’s about going out at night.  You’ve got someone that you’re crazy about but they’re not available to you, so you go searching for it in other people.”

The highly emotional, limited edition bonus track, ‘Mama This One’s For You’, reveals that she’s not afraid to tell her mother how much she loves her.  “It’s probably the most important song to me on the record.  I finally got how blessed I was to have my Mom.”

This album isn’t about the problems Beth’s faced in her life. Instead, she’s choosing to find the good things that have been there all along: accepting and loving her parents for who they really are, appreciating a good husband, facing her fears head on and ultimately finding ways to heal and convert that positive energy into music that moves people.  This is an incredibly moving, self written and composed record that’s going to reach people on a very personal level, because a one-of-a-kind artist found the perfect formula for exposing her very private inner voice and empowering it with her legendary outer voice.

Previous article
Review: UFO – A Conspiracy Of Stars (2015)
Next article
Crawling Down A Dead End!