No Shame In These Theories 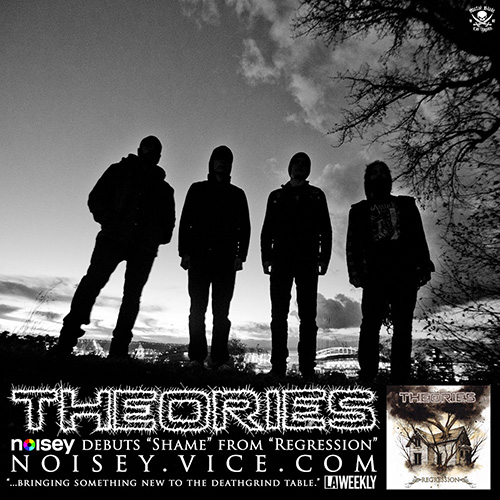 Regression is the forthcoming new full-length from Seattle death grind miscreants, THEORIES. Set for release next month via Metal Blade Records, Regression boasts ten tracks of grisly, unapologetic, crust-infused death grind that’ll rot you from the inside out.

Today Vice Magazine‘s music portal, Noisey, celebrates imminent suffering with third track, “Shame,” noting: “Theories take the innovations of bands like Misery Index and Kill the Client and add a little Northwestern crust flavor…It’s got more of a Carcass flavor than the other songs on Regression, which is probably why it rules so hard.”

Witness the sonic punishment of Shame, courtesy of Noisey, HERE.

THEORIES has been propagating the seeds of bleak, dark, and terminally infuriated grind metal in the Pacific Northwest since their 2011 inception. The band, comprised of current and former members Samothrace, Skarp, and Book Of Black Earth among others, released their debut EP that same year. Their touring campaign followed shortly thereafter, and have since terrorized the stages through the US on nearly a dozen tours and to festivals including Maryland Death Fest, Chaos in Tejas, Southwest Terror Fest, and their most recent tour with new label mates, Cattle Decapitation.

THEORIES‘ Regression will be available for public consumption on March 24th, 2015 via Metal Blade Records. Preorder bundles are currently available at: http://www.metalblade.com/theorieswhere you can also scrape your eardrums to “Cycle Of Decay.”

Previous article
Sex, Drugs And Murder
Next article
The Sun Beats Down On The Desert