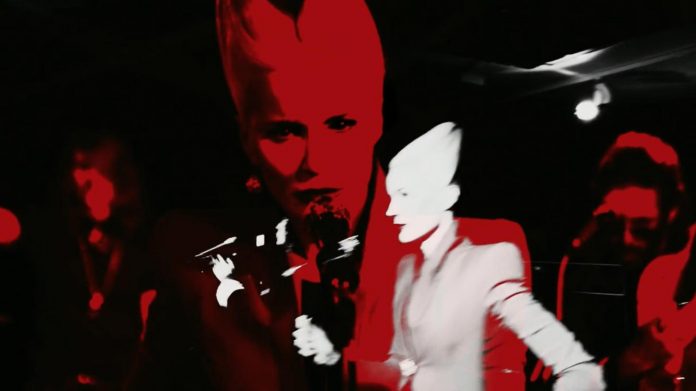 Daphne Guinness has today released the new video for ‘No No No’, the latest single to be lifted from her new album ‘Daphne & The Golden Chord’, produced by Tony Visconti and available now across CD & vinyl formats via Agent Anonyme/Absolute). Watch ‘No No No’

Directed by Daphne’s long-time collaborators The Fashtons (Aluna George, Maya Jane Coles, Django Django), the red-tinged, monochrome video for ‘No No No’ centres around Guinness’ (tongue-firmly-in-cheek) lyrical put downs, bolstered by saxophone blasts from Roxy Music’s Andy Mackay. Speaking about the clip, which captures Guinness performing alongside band members including co-writer Malcolm Doherty and Terry Miles (both of Go-Kart Mozart), alongside Gary Liedeman (Thin Lizzy), The Fashtons say; “This is just the real Daphne, the side of her that people don’t really know, it seems – a proper frontman, a bandmate, and a cutting wit. The whole video is made of two consecutive takes, uncut and un-choreographed.”

‘Daphne & The Golden Chord’ was released digitally earlier this year, alongside the premiere at the London BFI IMAX of music videos created for the album by both Nick Knight and The Fashtons. Visconti also worked on Guinness’ debut album, 2016’s critically acclaimed ‘Optimist in Black’, having been introduced by David Bowie. Bowie was so impressed with her music that he recommended her to his long-time producer, and another chapter of Daphne’s life began.

The new album captures Guinness’ songwriting brought to life by a new band including Doherty, Miles, Liedeman and Mackay, alongside Generation X’s James Stevenson. ‘Daphne & The Golden Chord’ was recorded live to analogue tape at London’s British Grove Studios, on consoles previously used on The Beatles’ ‘Abbey Road’, Pink Floyd’s ‘Dark Side Of The Moon’ and Wings’ ‘Band On The Run’. “I can’t sing a single word I don’t believe in,” says Guinness. “It’s the closest thing I can get to a memoir without making people I know very cross indeed. It’s all there: love, hate, nervous breakdowns.”