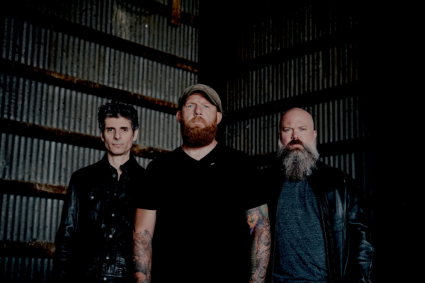 We brought you their EP first here last year, but now Idlewar are set to up the ante in 2016 with the release of their new music video ‘Out Of My Head’ and the promise of a release for their highly anticipated debut album.

A short, sharp, slice of rock that oozes groove, riffs and a HUGE chunk of melody, ‘Out Of My Head’ grabs your attention from the opening notes and doesn’t let up until the end, making you want to push replay again and again.

“The phrase ‘Out of My Head’ came to me one day” explains Idlewar drummer, Pete Pagonis “I sang that phrase to James (Blake – frontman / bassist) and we talked about the concept of wanting to shake the chatter out of your head that hinders you and keeps you awake at night”.

Idlewar’s frontman agrees “Absolutely, it’s an observation I’m sure many of us can relate to, especially in this digital age. The video in essence captures a ‘business’ person with artistic aspirations, coming home to rest and dream of the place he’d rather be…rocking out on a rooftop! The principal character needs to shake off the worries of his work life so he is free to enjoy his passion…much like many of us do on a daily basis.”

For fans of Foos hooks, lovers of Clutchesque grooves and modern rock ala Royal Blood, ‘Out Of My Head’ is taken from Idlewar’s debut ep ‘Dig In’ and is a “must have”. Released last summer, the ep has been featured in various zine’s ‘Best Of 2015’ polls, with the UK taking Idlewar to their hearts and asking the question “When can we SEE this band LIVE?”

“We’ve been blown away by the response to the EP, it’s incredible!” says Blake “right now we’re focused on producing the best debut album we possibly can and YES, absolutely UK, book us and we will come. Let’s do this!”

iTunes: ‘Out Of My Head’ + b-side ‘Stay With You’ – http://hyperurl.co/idlewaroutofmyhead

Previous article
Zodiac Got Soul
Next article
With Hevy Hearts