No Fear Of The Dark 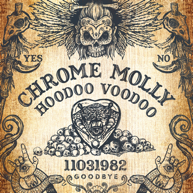 February 2, 2017
Reading time: 1 min.
Facebook
Twitter
Pinterest
WhatsApp
Linkedin
Email
Print
Telegram
Copy URL
By Andy Thorley
Chrome Molly release new video
“We wanted to make an album that made us feel like we did in the ‘80’s, one that you can turn up in the car and sing along and play air drums and guitar to”, says Steve Hawkins (vocals).

And with today’s release of ‘Hoodoo Voodoo’ everyone can grab their copy, turn up the volume and join in. You can even learn some moves from the boys by watching their new thrilling video for “Can’t Be Afraid Of The Dark” that comes along with the release of their 6th studio album today.

Hoodoo Voodoo draws on the bands core influences. Formed during the latter half of the New Wave Of British Heavy Metal scene, the Mollies were always inspired by the great metal bands and this album is something of a tribute to those acts – you might hear Priest, UFO, early Leppard, Saxon, Rainbow and myriad others echoing through the album.

While not strictly a concept album, the original idea was to create an album that conjured up the magic of listening to the great bands of the ‘80’s, with the riffs and tunes that shaped the band. Inspired by a friend who asked why bands don’t go in and make albums like they did in the old days, backing tracks were played live and much sweat was poured.

Tracklisting:
1. In The Beginning
2. Can’t Be Afraid Of The Dark
3. Some Kind Of Voodoo
4. Pillars Of Creation (Albion)
5. Now That Those Days Have Gone
6. Indestructible
7. Save Me
8. Rock For You
9. Feeling Pressurised
10. Dial ‘F’ For Freakshow