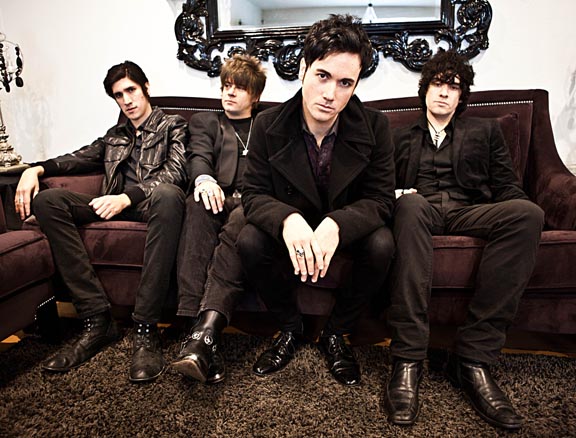 Born and raised in the San Fernando Valley on a steady diet of punk and glitter rock, Prima Donna are infamous on the L.A. scene. Their curriculum includes musical road trips with Eddie and the Hot Rods, Adam Ant, D-Generation and even Green Day, who they supported on two arena tours on two continents. Frontman Kevin Preston has also continued participation in Green Day side-project Foxboro Hot Tubs.

While touring the US and Europe, Prima Donna was in and out of the studio numerous times, both at home in L.A. and in Milan, Italy. The finished product is Nine Lives and Forty-Fives, an 11-song variety pack that displays the band’s skills in the studio, and compiles some of their rarest and rawest recordings, including “Rock and Roll is Dead,” available for the first time in U.S. The track was named one of the Top Ten Songs of 2013 by Little Steven’s Underground Garage.
Nine Lives and Forty-Fives features eight original songs, and three covers: “I’m On Fire” (Dwight Twilley), “Rock and Roll is Dead” (The Rubinoos) and “Rip Her To Shreds” (Blondie).
PRIMA DONNA PREMIERES THEIR NEW STUDIO ALBUM “NINE LIVES AND FORTY-FIVES” VIA YAHOO! MUSIC.CLICK HERE TO LISTEN!
Prima Donna’s Nine Lives and Forty-Fives will be available next Tuesday, February 10th, 2015 on CD, digital and limited edition colored vinyl through Alive Naturalsound Records.
Previous article
I Just Called To Say I Loved You?
Next article
Don’t Be Scared Terror Empire Stream Record Online