Not one but two MVM reviewers went to watch Nils last week. Here are both their thoughts on what was evidently a fine evening

On a chilly winter Monday evening in January there was only one place to be: The beautiful setting of the Town Hall in Birmingham for an evening with Nils Lofgren.

As Nils took to the stage there was maybe only a handful of empty seats in the venue, for whatever reason those people didn’t attend, travel issues, man flu? They missed a cracking performance.

Nils opened the show with a piece of music played on the harp which led us beautifully into the track ‘Too Many Miles,” this shaped the whole evening ahead of us, tracks such as ‘New Holes In Old Shoes’, ‘No Mercy’, ‘Black Books’, the utterly awesome ‘Girl In Motion’ plus covers by Carole King & Neil Young were delivered with all the experience and ease of a guy who has spent 40 years plus in the music industry

Each song was proceeded by wonderful anecdotes from a guy who has certainly enjoyed his time playing with the likes of Stephen Stills, Neil Young & Crazy Horse and many others, sadly most of the guys Nils mentioned seemed to have past away in recent years…..’a problem when you reach this stage of your career’ he said with a wry smile.

Nils was accompanied throughout the evening by the multi talented Greg Varlotta who seemed to be able to turn his hand to anything….whether it be keyboards, guitar, trumpet or even tap dancing which had the packed audience laughing out loud as they clapped along, Nils even joined in with the tap dancing routine during ‘I Came To Dance’ which brought the main set of the evening to a blistering close

The encore contained a magnificent version of Nils only ‘hit single’ in this country in ‘Shine Silently’ which included a wonderful guitar solo and Nils doing his customary whirling dervish impression, the whole evening was a joy from start to finish, it had it all…..and to take a leaf out of Mr Springsteen’s book….. 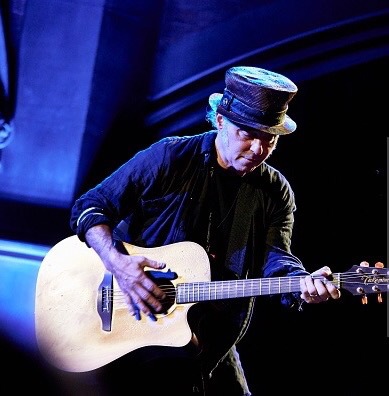 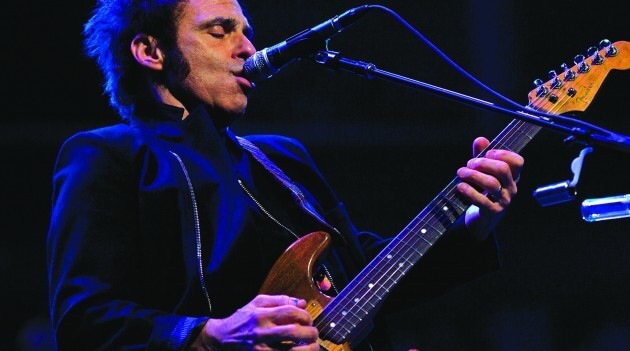 The Cat in the hat purrs in Brum

Well my first show of the New Year and what a gig to start with.

I first saw Nils Lofgren in the late seventies and many times since, solo, with a full band and also as a member of Springsteen’s E Street band.

A little after 8pm, the lights go down and onto the stage walks Greg Varlotta and Nils wearing a sprightly top hat.

He sits astride a harp and completes a melody before opening the show with “Too many Miles”.

“New Holes in Old Shoes” follows after being introduced as a song which was written about a time that Nils was fighting his demons, such as drinking a bottle and a half of gin and anything else he could get his hands on. These days his nemesis is a bowl of Hagen Daas ice cream!

“Walkin` Nerve” follows, a number about growing up and is dedicated to his two step-sons.

“Cross the tracks”, “Just Because you love me” dedicated to Nils`s beautiful wife Amy.”

An animated Nils shares some stories about recording sessions with Neil Young and members of Crazy Horse and also Stephen Stills.

Another Grin number “Rusty Gun” is shared before we are told a story about how the next song “Black Books” came to be used in the second series of the Sopranos.

“Keith Don’t go” about Keith Richards comes next before Nils takes to the piano to play “Going back”, “Irish Angel” and “The Sun hasn’t set on this boy Yet” .

“Dream Big” is up next before Greg Varlotta accompanies Nils on “Mud in your Eye” by tapdancing the drum parts. “No Mercy” closes a wonderful set.
A two song encore of “I came to Dance” and “Shine Silently” wrap up a nearly two hour set.

Nils tells everybody that he is happy to sign cds, albums and T shirts after the gig and judging by the queue it must have been some time before he got away.

A special mention goes out to Greg Varlotta, a multi talented artist, who accompanied Nils tonight on keyboards, trumpet, board, vocals and guitar
Nils has a 45 year career retrospective out on a 10 cd box set called Face the Music, which has home recordings, 40 unreleased tracks and a 136 page booklet. Well worth the investment.

So my first gig of 2015 and a cracker to start with. It was good to see a really anNils sharing stories from his career. At 63 we no longer get any of Nils famous back flips, partly due to a double hip replacement but what I can say without a doubt is that “The Sun hasn’t set on this boy yet”