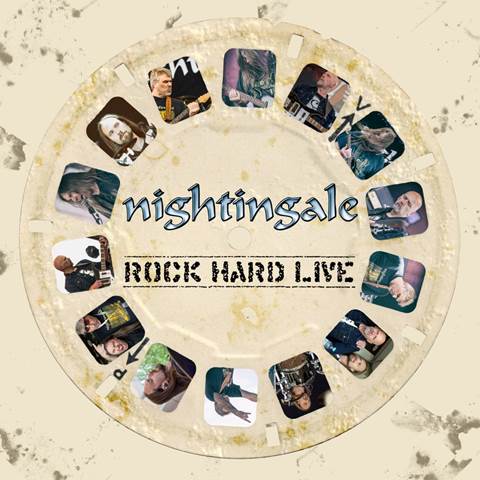 Following up NIGHTINGALES’s latest studio album “Retribution”, which was released in 2014 via InsideOutMusic, “Rock Hard Live” was recorded at Germany’s Rock Hard festival in 2016 and contains the following tracklisting:

NIGHTINGALE’s Dan Swanö checked in with the following comment about “Rock Hard Live”:

“After eight NIGHTINGALE studio releases the time had come for a proper live album!

When we were invited to perform at the prestigious Rock Hard Festival in May 2016 we felt that this could be the right time and place to capture the energy of a NIGHTINGALE live performance.

Once we listened back to the recordings of the gig it became obvious that there was a special vibe both on stage and in the audience that day. And in order to capture that we decided to mix the album with a very high percentage of the sound coming from the two audience microphones.

This approach gives the listener the sensation of actually being there at the gig when you listen to it. But this also means that you have the occasional out-of-time and tune-notes here and there, since there is no way to fix anything in the studio once you mix an album this way.

So, “Rock Hard Live” indeed is a genuine sonic snapshot of what NIGHTINGALE sounds like on stage, warts and all!”

A first single (and iTunes instant grat track) off “Rock Hard Live” is also being launched today, as the pre-orders for the album commences. Check out “Chasing The Storm Away” here:

While InsideOutMusic is handling digital release for “Rock Hard Live”, its CD and LP (Black or coloured vinyl) formats will be issued via Spain’s Alone Records, who are also launching an LP version of NIGHTINGALE’s latest studio album “Retribution” on December 8th, 2017.
More details and pre-order options can be found here:
http://www.the-stone-circle.com/store/en/14-pre-order-releases

The CD version of “Retribution” comes with O-Card packaging and the entire album as full dynamic vinyl mix in high-resolution MP3 format as enhancement. It can be purchased via the InsideOut Shop here: http://smarturl.it/retributionIOMshop

NIGHTINGALE was established by musical multi-talent and producer Dan Swanö (Edge Of Sanity / Witherscape) more than 20 years ago and in the good tradition of the band, which is completed by Dan’s brother Dag Swanö (guitars, keyboards), Erik Oskarsson (bass) and Tom Björn (drums), the new album once again showcases a fabulous and timeless hybrid of different musical styles: From atmospheric metal to catchy AOR and also melodic prog,

In related Dan Swanö news, it has been recently announced that 27 years after its initial release, his rock group Unicorn are re-issuing early demo recordings as “A Collection of Worlds – Resurrection”. Find more details about the project here:
http://unicornsweden.bandcamp.com/album/a-collection-of-worlds-resurrection

Swanö will next be working on a yet unnamed death metal project, showcasing material in the vein of his compositions for Bloodbath, mixed with the early style of Edge Of Sanity and Pan-Thy-Monium. Something to look out for in 2018!