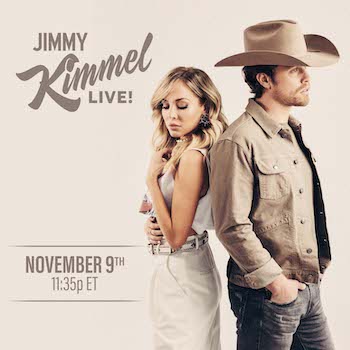 Big Loud Records’ MacKenzie Porter is coming in hot by announcing a week full of career firsts. First up, the rising star will make her late-night television debut alongside Dustin Lynch performing their smash hit ‘Thinking ‘Bout You‘ on ABC’s Jimmy Kimmel Live!  tonight (9 Nov) at 11:35 p.m./10:35 p.m. CT. This milestone comes as the two are quickly approaching Top 5 at Country radio.

Adding another checkmark on her bucket list, Porter is set to make her Grand Ole Opry debut this Friday (12 Nov). Keeping her set-list a surprise until the night of, fans will need to tune in to hear the songs Porter will play as she steps into the legendary circle for the first time.

Also this month, Porter and Lynch are expected to make the first Canadian broadcast performance of their power duet at the 2021 CCMA Awards live from Budweiser Gardens in London, ON, on 29 November. Adding to the night, Porter will vie for FOUR awards: Entertainer of the Year, Female Artist of the Year, PRS Guitars Video of the Year (‘Drinkin’ Songs’) and Fans’ Choice.