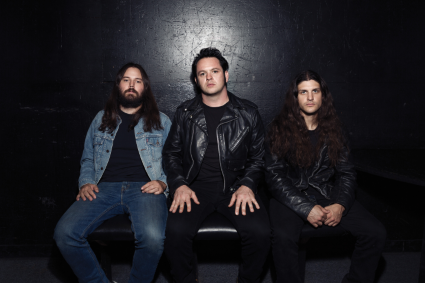 Ace Ventura (see what we did there……?) band ink new deal and release new record next year

Classic metal trio Night Demon, who hail from the city of Ventura, an hour north of Los Angeles, have signed to Steamhammer / SPV Records to release their debut, full length album, ‘Curse Of The Damned’, on January 19th 2015.

But while the band’s music proudly exhibits these roots, it does so in a totally fresh, modern, contemporary manner, breathing sparkling new life into the genre with ease.

Night Demon, who formed in 2011, made such huge waves in Europe (let alone the US) with their self-titled debut, four track EP, released in April 2013, that they were able to tour Europe extensively in Spring 2014.

Numerous European record companies who caught the band live on that tour were very interested in signing the band, but Night Demon chose to ink with Steamhammer / SPV above all others.

Night Demon, a consummate live band who won over a host of new fans when they supported NWOBHM legends Diamond Head and Raven on a short US West coast tour in 2013, are currently garnering even more converts on a full 2014 Autumn North American tour with Raven.