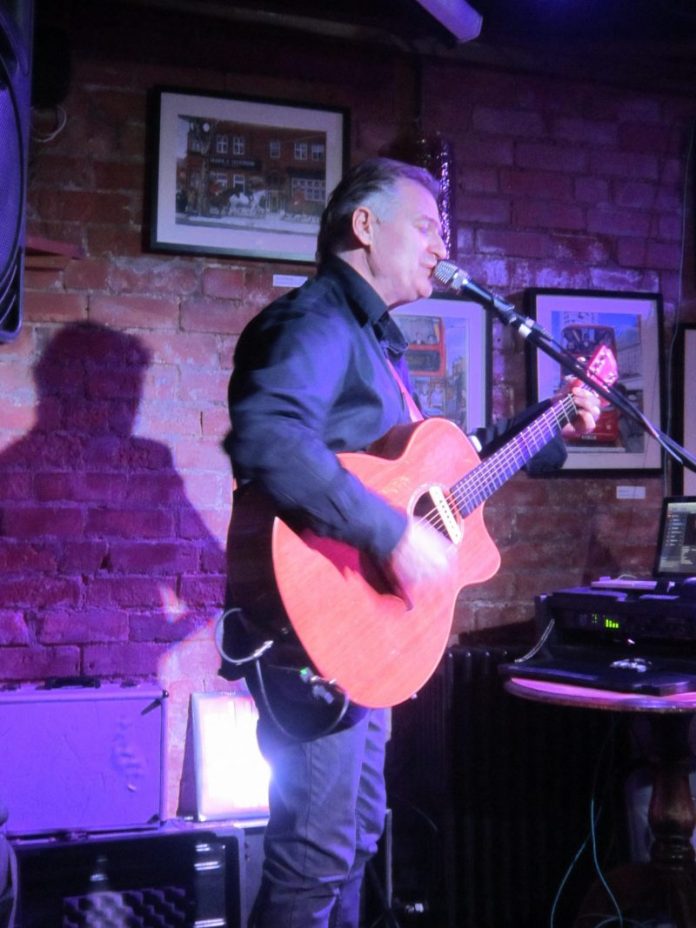 It’s the third night of a tour named One Hundred Things and we are all squeezed into the sold-out venue that is Kitchen Garden Cafe. Nick Harper has returned quickly to Kings Heath having left the band who gave us Lies Lies Lies ‘where he found them’. For his return, Nick asked us to e-mail song requests (I didn’t because I couldn’t make up my mind which song to choose – the only track that kept popping into my head was Riverside and it’s not a song!). A Hundred Things was not a requested song but it is the tour name, so he ‘plays it anyway’. This song is opening track on his first release – the EP entitled ‘Light at the End of the Kennel’ from 1994. Next comes the ‘song that wrote itself’ – The Verse That Time forgot. An intense song from his third recorded offering, ‘Harperspace’

By now Nick is well into the swing of repartee and banter with the receptive audience and it’s going to be an epic night… subsequently we’re smashed to Smithereens. Back in 1998, this was my first ‘Harpic’ purchase and with only my eyeliner to hand, he willingly signed the CD. Twenty years, wow!

We are now treated to new technology via the rack of effects boxes at his feet which includes the reverb that waylaid his rehearsals. The true talent that we are all here to witness is unleashed and the instrumental intro fills our ears for Watching the stars. A bombardment of historical explanation, Monty Python re-enactment and reference to working in the studio (or shed) leads us to The Field of the Cloth of Gold and, allegedly, the start of Glastonbury! The first of two offerings from Miracles for Beginners 2007. As the gig progresses, it seems that those who did e-mail a request are very familiar with Nick’s Millennial release ‘Harperspace’ with Karmageddon being the next song. Back to technology and it ‘looks like rain’. With a scraping of the strings, the effects box turned out rain and we end the first set with She Rules My World.

Drinks break! A delayed restart moves us on twenty years from ‘Light at the end of the Kennel’ and we get two songs from ‘Nix’. A technical issue gives input but no output. Glasses that fit on the guitar are clipped on his nose. There’s some fiddling with the laptop and the problem is solved. He launches into the only song that he’s sat down and written for someone – Beauty came first – a song for his son. Another instrumental intro with effects “from the shed” and Nick’s remarkable vocal range fills the air as we Breathe. We revisit ‘Miracles for Beginners’ to honour the ‘only politician he likes’ – President of Bolivia – Evo Morales. Nick is on a roll with harmonics and peg turning – who needs technology? We hit the two-hour mark and politics… three songs from his recent band venture – Lies Lies Lies, Black Friday and Magic Money Tree. Interspersed with Spanish guitar-like melody and harmonic interludes. A return to requests, early work and family inspiration – the greatest inspiration being his Dad, Roy, the Crazy Boy. A song from the 1995 release, ‘Seed’. Followed by one for his daughter: Blood Song with a lengthened instrumental interlude which further shows the musical talent within. Magnificent G7 or Bloom? is the debate and the winner returns us to ‘Smithereens’. Three hours gone and Love is Music. This includes Headless (from ‘the Kennel’), sitar like effects, mid song tuning, The Beatles’ Norwegian Wood. Jeff Buckley’s Grace, Led Zeppelin’s Four Sticks and David Byrne’s Lazy before its crescendo climax. However, the climax doesn’t draw us to a close and we’re taken into the new day with a new venture inspired by living in Wiltshire. A tut into the mic and a ticking clock tells us There is Magic in this World.

It’s been well over twenty years since my older brother first took me to see Nick at The Hibernian in Birmingham (where?! I here you shout. Don’t think it’s even a pub any more…?). As I sat furtively across the big space in front of the low stage, I was simply expecting to be entertained by son of Roy. I was stunned, my jaw dropped at the phenomenal guitar playing and I was hooked. May the ‘happy babbling streams’ continue yet!

Previous article
Witch Craft?
Next article
The Art Of Memoriam