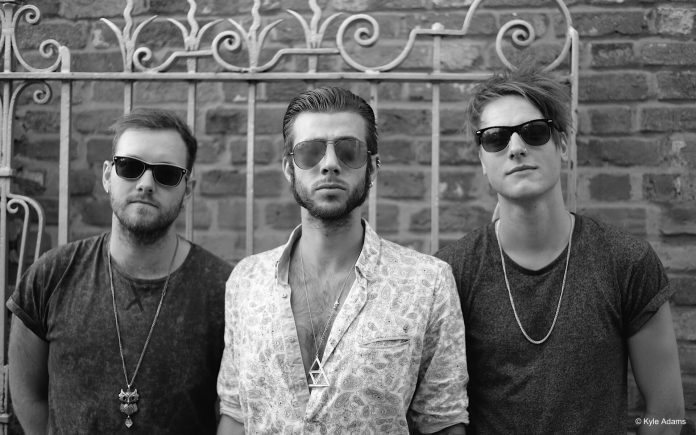 This story begins back in November. MVM finds itself watching the soundcheck of Broken Chords in the basement of the Leamington Assembly.

It’s a decent venue, called The Zephyr Lounge, and there in about three hours time, one time Ozzy Osbourne guitarist Bernie Torme is to kick off his UK tour. BC – Jamie on Drums, Aid on Bass and Joe on lead vocals and guitar – are the support for most of the dates on the tour, but before we can get down to business there’s pressing matters to sort. Joe has, perhaps appropriately for a band called Broken Chords, bust a string, while the others breeze past us after sticking out a friendly hand: “Back in a minute,” offers Jamie. “Got to move the van. Do you know where we can park around here, and do you want anything from the shop?”

A short while later, everything sorted, we are all backstage. In the dressing room of the Assembly, things are a little bit odd. Firstly Jasper Carrott is playing something called Rock With Laughter upstairs tonight so his backing band, which includes assorted members of ELO, are here too, and right slap bang in the middle of the room, for reasons none of us can begin to fathom, is an enormous gypsy caravan. There is also a Rocking Horse and an Ostrich.

Boringly, we all opt for the chairs, and a clearly excited band give us their philosophy. “Look, we just want to rock,” says Jamie. “Live, we are loud, stripped back, good, honest rock and roll. In the studio we can try things, but on stage, yeah, we just want to get in your face.”

The band are clearly happy to talk a lot and in particular about music, bands like Foo Fighters and Biffy Clyro are mentioned, while Joe is a huge Prince fan, there is also talk about current rock flavour of the month Royal Blood. Broken Chords have little in common sound wise with that duo, but they do take inspiration from the breakthrough that’s been made.

“They came from nowhere,” states Jamie, “and did it by getting some festivals and showing everyone what they can do. We believe that if you give us half an hour in a tent at a festival then people would remember us too and that we can go all the way.”

An hour later they set about proving it, and holy moley they aren’t wrong. Way heavier than the demo said they were, they are nothing short of classic rock played classically.

A couple of weeks later – as was always the plan – we are to meet with them again. This time they are in the West Midlands again to open for cult Australian hard rockers Electric Mary, and meeting them half an hour before show time. No longer just excited, they have a much more confident air. One of a band, in fact, that’s been on a proper UK tour for the first time and – notwithstanding the fact that some idiot kicked their wing mirror off in Nottingham – has had a great time, and moreover knows they can do it.

“It’s been superb,” smiles Aid, while Jamie explains just how well they got on with the Bernie Torme Band – so much so in fact, that the guitarist has invited them to play his annual Christmas party at Chez Torme.

The only issue here is that Joe isn’t feeling well. He comes down to see us, though and responds to our “hello mate, how are you?” By explaining he had a nasty cold and is worried about his performance at the bands next gig, some two days hence, which is being filmed. It should be noted that it doesn’t stop the singer offering MVM some of his chips a few minutes later, but then these guys really are the nicest you could possibly meet.

For all Joe’s worries, Broken Chords are again absolutely brilliant. The new songs they play “Rock And Stone” and “Tell Them Of Us” are magnificent and for a band who at that point hadn’t even got anything other than a 10 track demo available, their potential is frightening.

Show over, the trio sit and watch Electric Mary with us, and they are fans again, enjoying rock n roll, which in EM’s words is the way it should taste.

A few weeks earlier we asked a simple question to the guys: where do you want to be in two years time, then? Their answer was unequivocal. “America” they all say almost in unison. “That’s where all of us want to be, that’s our dream, but more than that, it’s a realistic aim. We want to be big.”

And for once, none of them appear to be joking.

The debut studio EP “Rock And Stone” was released this week. Review next week.