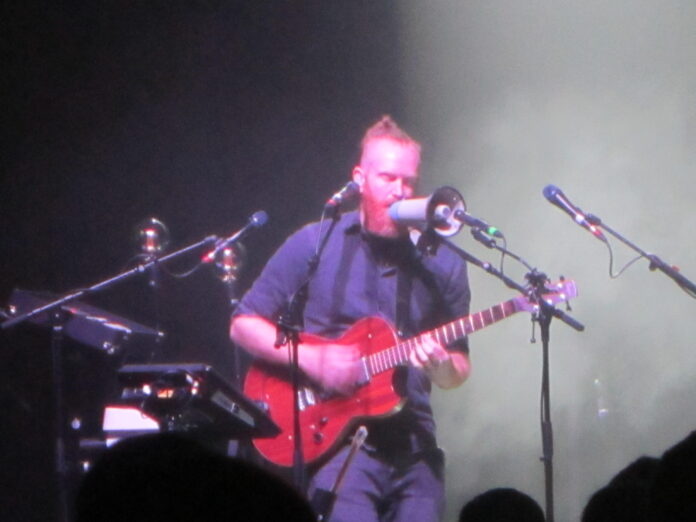 I have to admit I bought Newton Faulkner`s debut album ` Hand Built By Robots` and really enjoyed it then seemed to lose touch with him until this year`s seventh studio album `Interference (Of Light)` which I have to say was a slight change of style but wonderfully enjoyable, nevertheless. I`d never seen him live and was determined to change that when his The `Interference (Of Light)` tour reached my home city which is just over the halfway mark on this fourteen date tour of the UK and Ireland.

There must be about fourteen hundred people here as the lights go off and this singer -songwriter and musician saunters onto the stage for what will become an almost two hour solo set. First up is `Ageing Superhero` from the debut album and it has all the faithful crowd singing along. I almost didn`t recognise `Sinking Sand` as it was delivered through a distorted mic or megaphone with some interesting percussive effects adding to the sound. The captivating `Clouds` has the singer dividing the audience to sing distinct parts as they sing and clap along.

I`d forgotten that Newton had covered Elizabeth Fraser and Massive Attack`s classic `Teardrop` on his first album and he shares his stunning interpretation tonight. We enjoy a smattering of old and new numbers with `Four Leaf Clover`, `Fingertips`, `Here Tonight`, `I Need Something` and `Killing Time` which built in sound as it progressed with some interesting synth vibes.

One of the biggest cheers tonight was when `Dream Catch Me` got an airing and at one stage the singer had to just stum his guitar as the crowd took over singing the lyrics. In the latter part of the show somebody seemed to be blowing a kazoo through `Rest Of Me` before we enjoy the soulful `Hit the Ground Running`, `Together`, `Leave Me Lonely` and `Gone In The Morning`.

The singer explains that he doesn`t do encores as he feels there`s little point in leaving the stage only to return so he closes out with `Brick By Brick`, a bluesy version of `UFO` and ` Write It On Your Skin` where he has everybody jumping up and down as it`s played. There`s an audience request for `Full Fat` before we are left with `It`s Getting Late` from the latest release.

Tonight, was a little different to what I was expecting as it was stripped back with just the singer and a variety of guitars and other sundry instruments but still delightfully captivating. The singer did seem really at ease with the audience which to me is a sign of confidence not only in your song writing ability but also a maturity that comes with being able to deliver those songs. There aren`t too many artists around these days that could mesmerise a packed venue for nearly two hours with just a guitar and vocals.