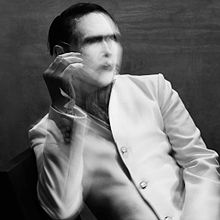 US shock rock giant Marilyn Manson will release his new album, “The Pale Emperor”, on 19th January 2015 via his own label Hell, etc. in a joint venture with the label Cooking Vinyl.

Manson has been a busy man of late with several TV appearances and shows such as “Eastbound and Down” to Sons of Anarchy”. However, it’s his music that still inspires and delights his audience and they will be eagerly awaiting this new release. Just like Maximum Volume.

A sample of what to expect can be found on his recently made available track “Third Day Of A Seven Day Binge” which you can download at MarilynManson.com. the full tracklisting is below:

Manson‘s last album, “Born Villain”, earned him his fourth Grammy nomination at the 2013 Grammys in the Best Hard Rock/Metal Performance” category for the album’s lead single, “No Reflection”.