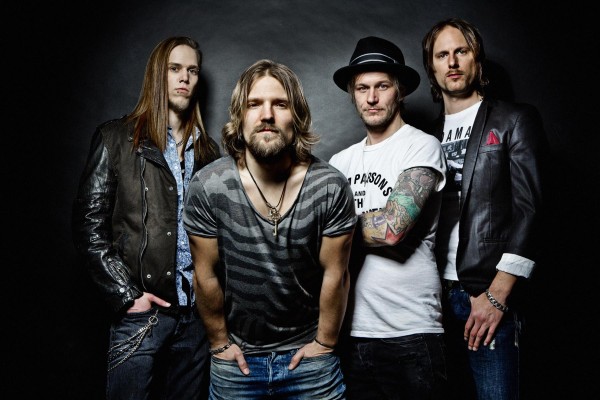 THE NEW ROSES are the new Rock sensation coming from Germany – or to be more precise from the tranquil Rheingau, better known for its impressive castles, monasteries and vineyards.

THE NEW ROSES are a true rock’n’roll monster, combining influences of AC/DC, Kid Rock, The Black Roses and Aerosmith skillfully with an enriched and unique sound.   A crowning achievement saw the band’s track “Without A Trace” was featured in the TV trailer for the US hit series “Sons Of Anarchy.” With more than 150 shows and festivals played all over Europe in the last three years, numerous avid fans, THE NEW ROSESare ready to rock!

This success of THE NEW ROSES has now gotten them a worldwide record deal with Napalm Records / Universal. The band is hitting the studio this April to record their new album, which will be released in late summer/autumn this year.

Max Riedler (Napalm Records CEO):
“We are delighted to have discovered THE NEW ROSES as a bright shining star in the world of Rock music!A great band with a great future! They are totally on the right way!”

The band are thrilled at the deal Urban Benz (drums):“We are very pleased to sign with a great and established label like Napalm Records. This confirms our belief in Rock and Roll and what we do for years now. It also shows us how important it is to consistently and persistently pursue the own path. We feel the deal with Napalm Records as a reward for our efforts in the recent years and we are now confident and highly motivated working on the recordings for the new album!”

Timmy Rough (voc, guit):
“It is good to know that we are on the right way! Napalm Records is a very good and experienced label and we’re really looking forward to working together. We will play as much as possible this year and of course put our focus on the production of the new album on which we are already working very hard. We know that many of our fans have been waiting quite impatiently and we are looking forward even more to have a valuable partner with Napalm Records who will support us with full force in the production and marketing of the 2nd album! “