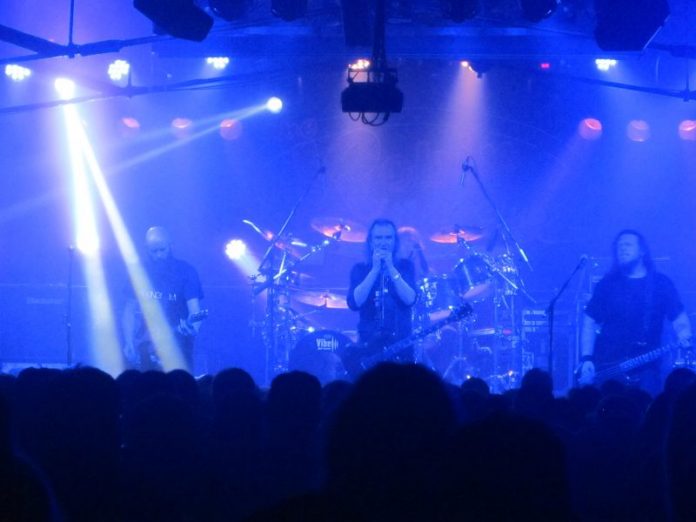 Damian’s in the army now…..

It’s a number of years since I’ve seen NMA so I was really looking forward to this show, even more so as the last album `Winter` was a terrific release.

New stuff can wait though, as when the band hits the stage and it’s straight into `R & R` from the Eight album and the cracking chorus of “Wake me in 1000 years`

The first track we get from Winter is the title track. An evocative song that almost makes you feel that you are there awaiting the coming danger as the words are spat out with relish.

The apocalyptic `Here Comes The War` with it’s thumping bass and pounding drums and Justin’s almost preaching lyrics has the first of the faithful standing on shoulders with arms outstretched, creating an atmosphere that is so often missing these days at live shows.

Another anthemic track from Winter follows with `Part The Waters` before the tribal call to arms “The Charge” based loosely on the charge of the light brigade poem is shared.

Two superb songs with lyrics that really make you reflect, are bestowed upon us with `Angry Planet` and the wonderful `Born Feral` where Justin finally comes up for air to say “How Ya Doin`?” to the packed, Sold out, frenzied crowd before launching into it.

The band then blast through the rockier `Eyes Get Used To The Darkness` another track from Winter.

`No Pain` is introduced as a love song for the broken hearted and we are informed at our age that we all must be.

There is a song from Winter called `Die Trying` that addresses the plight of refugees at Calais and the band have discussed playing this on the tour but felt that another song written thirty years ago covers the subject just as well so the emotive `Higher Wall` is played. It is even more effective as it’s offered with an acoustic guitar and organ highlighting Justin’s haunting vocals.

Another cracker from Winter `Devil` a rockier refrain with thumping bass, rhythmic drums and grinding guitar back the lyrics of “If you look for me you will find me, you will find me” Wonderful.

A song that needs no introduction and has everybody singing along comes with the compelling `51st State` and I’m transported back to my youth and how this track had a real impact on a younger me.

Twinkling keys sounding like an xylophone introduces `Between Dog and Wolf` before Justin confesses that he loves happy death songs and that “Don’t Fear The Reaper” must be number one but this number has got to be second and launches into `Wonderful Way To Go` which closes the set out.

A short break and then comes the encore which comprises three numbers.

The superb `Vagabonds`, ` Poison Street` a song that we are told is right for tonight as Saturday night is dancing night` and ` I Love The World` Phew.

Tonight was a cracking blend of thought provoking song writing, intimidating, heartening post punk, rock and folk delivered to us by some gifted musicians, whom it would be remiss not to mention Michael Dean on drums, Dean White on keyboards and guitar, Marshall Gill on guitar, Ceri Monger on bass and the great man himself Justin Sullivan.

This evening made me question why I have left it so long to reacquaint myself with this stunning outfit, especially in a live situation and I certainly won’t let that happen again. This is one army I would definitely encourage you to join.

Previous article
Reach For The Cky
Next article
REVIEW: THE OBSESSED – SACRED (2017)