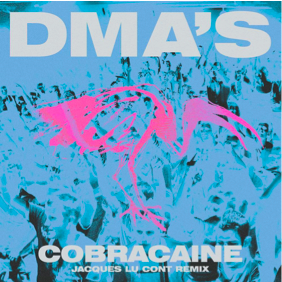 The release of DMA’S’current album ‘THE GLOW’has seen theAustraliantrio elevate themselves to a new level. Their sound evolved to add pulsating alt-pop synths and big beat dynamics to their anthemic arms-in-the-air hooks. It’s an approach which has amplified their following as they achieved the high chart positions of their career to date , peaking at #4in the UKand #2in Australia.

Now DMA’S end the year by sharing the new Jacques Lu Cont remix of ‘Cobracaine’. He twists the album’s epic emotionally driven closer into a pounding electro house track with electrifying drops. That relentless energy is complemented by a euphoric edge, highlighted by an atmospheric breakdown and the use of Tommy O’Dell’s gritty, soulful vocals as an uplifting texture rather than a topline.

Jacques Lu Cont is one of the many aliases of Stuart Price, the multiple Grammy-winner who produced ‘THE GLOW’. His countless high profile credits include production and remixes for everyone from Dua Lipa and Madonna to The Killers and The Rolling Stones.

Next year will see DMA’S embark upon their long awaited first UK and Ireland tour in support of the album. In April they’ll play their biggest UK headline show to date at London’s prestigious Alexandra Palace along with their first arena dates. They’ll then return later in the summer to headline a selection of huge outdoor shows. The band’s previous UK headline tour resulted in 40,000 ticket sales, which they followed as the main support on Liam Gallagher’s 2019 arena tour, and most recently with a sold-out Brixton Academy show early in 2020.

Tickets for the shows, listed below, are available here:

THE ORIGINAL VERSION FEATURES ON THEIR TOP 5 ALBUM ‘THE GLOW’

11th – Manchester, Castlefield Bowl – Sounds of the City (SOLD OUT)