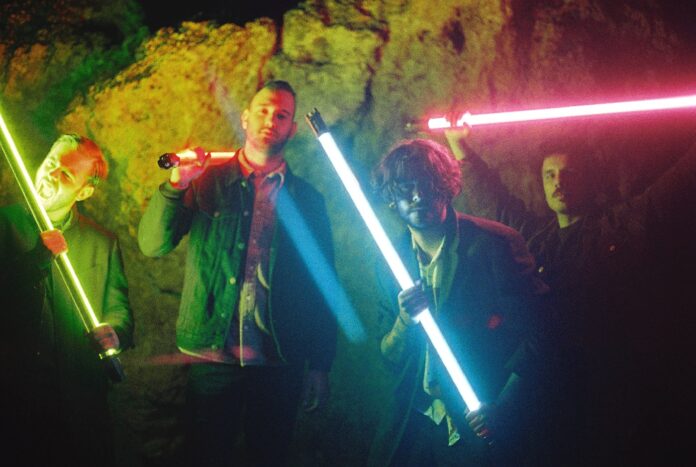 View the band’s incredible tour poster below, with artwork by Chris RW – the mirror image of the spectacular album artwork, by the same artist.

Shortly before this, Naxatras will be touring the UK; dates here:

Naxatras will be touring their stellar new album IV, out now.

IV is the band at their creative peak, with all their experience put to use. It’s been almost a decade now since Naxatras first set out from the Greek north to carve out the path fate had set for them.

Since 2012, the group have been honing the rough edges of psychedelic rock, combining heavy riffs, heady soundscapes, astral melodies and a deep appreciation for groove.

IV is – fittingly – the first new music to showcase Naxatras as a quartet. It is a significant departure for the group, already celebrated across Europe for their jamming-based approach to psychedelia. The focus with IV is now more directly on songwriting, musicianship and composition – drawing magic from early 70s prog rock and master songwriters of esoterica.

The new album has gaps that only a keyboard can fill, so Naxatras welcome a new member to the clan: Pantelis Kargas. The whole operation of the band has changed – the previously trademark analogue sound has shifted to a more surgically precise approach, the orchestration multileveled and powerful.

Naxatras‘ musical imprint began in 2015, with their first album I. Recorded in a single day, the record was a best-selling underground sensation and welcomed with critical acclaim.

Shortly after the band went on their first tour, with live shows in Greece and five neighbouring Balkan countries. The second album – II – followed in 2016, with the same attitude in live performance, live recording, and fully analogue mentality.

However the road proved to be the band’s calling – summer 2016 led to Naxatras‘ first full European tour, sowing the seeds of high anticipation.

An established act with the release of III, 40 more European dates followed, with a firm fanbase in every city on the continent. The album release show in Athens was to more than 1,000 devotees, a sold-out spectacle, and the subsequent tours included performances at Desertfest, Rock Im Waid, Duna Jam, Ozora and a series of appearances in Australia.