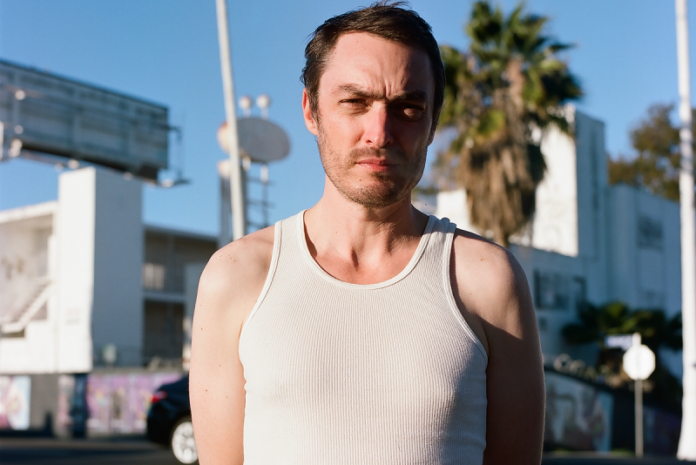 The former Civil Twilight vocalist and songwriter Steven Dayvid McKellar has returned with ‘NAMA’, the follow up to his 2020 debut solo album ‘ETHIO’, and it finds the artist at play in his Los Angeles apartment as the pandemic raged. McKellar had left Nashville and arrived with the expressed intention of experiencing La La Land in peak, post-apocalyptic distress – a fitting metaphor for a record implicitly concerned with staring our deepest emotions in the face.

Deftly self-produced, ‘NAMA’ is a musical self-psychoanalysis of McKellar’s id, where the primitive utterances of the subconscious are quite literally coaxed and arranged into fully realised expressions of song. It is a disciplined process that McKellar has been honing for several years in his painting as well as his solo music. Unconcerned with a predetermined theme, ‘NAMA’ is a meditative and patient coming-to-terms with the deep recesses of humanity.

The emotions and impulses McKellar draws on for this short and sweet seven song recording are manifested primarily via a Juno synth, vocals and drum machine, accompanied intermittently by bass, classical guitar and the interwoven percussion of ordinary household items. Additional instrumentation was provided by friend and occasional bandmate Bucky Shorts.

Despite the seemingly restrictive minimalism of its construction, ‘NAMA’ is teeming with dense atmosphere, layers of crunchy, trancing beats, haunting melodies and back-road, windows-down introspection. At its heart, however, is an odd, paradoxical sense of joy – that particular sort of quiet pleasure that can only be found in the unsatisfied desires of life that, by their mere existence, point us hopefully toward the unknown and the numinous.

From the minimal electronic heartbreak of its opener (and previous single) ‘One and Zero’ to the haunted claustrophobia of ‘Stop Running’ and the fractured beauty of the closing ‘Edge Of The Garden’, ‘NAMA’ somehow balances introspection with an outward push into the unknown.

With Civil Twilight, McKellar had seen life on the big screen, leading the South African rock band through a successful run that saw them share stages with the likes of Smashing Pumpkins, Florence + the Machine, Jimmy Eat World and Silversun Pickups, while their songs were placed in TV shows such as One Tree Hill, House and Terminator: The Sarah Connor Chronicles.

Now releasing music on his own terms, McKellar remains ever creative. Ahead of ‘NAMA’, a three song EP is headed up by ‘Stop Running’ and also includes the trippy non-album track ‘Middle’ and a live version of ‘Don’t Ask Me Why’ from ‘ETHIO’, a record that was issued at the onset of the pandemic and suffered from the upheaval of that time. Pensive and soulful throughout, ‘Stop Running’ explores both the isolation and the curiosity in navigating oneself through dark times, with McKellar diving deep into the subconscious and unearthing melodies that strike the gut, eliciting deep-seated emotions of lingering questions in his textured electronic style.

“‘Stop Running’ is a tune that was originally entitled ‘Stop Trying’,” explains McKellar. “It’s a conversation with myself as well as with the culture around me, and is inspired by the idea behind Charles Bukowksi’s quote ‘Don’t Try’ on his tombstone. To me, it goes hand in hand with another great quote by [self-styled English ‘philosophical entertainer’] Alan Watts from an interview in the early ’70s when responding to a question about the scattered trajectory of modern American society: ‘Stop this perpetual agitation to go somewhere, get the future. The future is nothing but an abstraction. There IS no future.’ To me, it’s a call to let live what I’ve already put out into the world, to let that grow and collaborate, to stop chasing, and to be in the present. The new EP as a whole reflects this idea.”