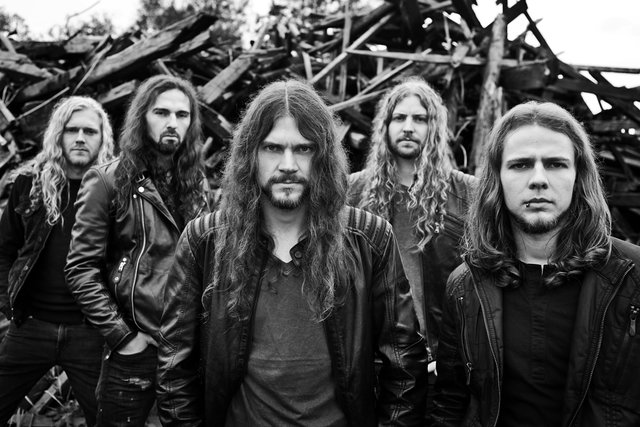 Comments the band, “It almost felt like coming home when we returned to the Woodshed Studio where we already recorded our last album »King Delusion«. Working with producer V. Santura has been such a great experience last time that there really was no doubt about asking him to produce this new album. We are still working on the the songs here in the studio, so they are not really finished at this point, but we can already tell that it might become our darkest album so far. Even though it’s typically NAILED TO OBSCURITY, there will be a lot of new things to discover that we haven’t done before. Drums are done now and we just started recording the guitars. We can’t wait to hear the final result and present it to you!”

In addition, the band has recently been announced as support act for melodic (death) metal heavyweights AMORPHIS and SOILWORK’s co-headline run in early 2019. Additional support will come from Ukrainian modern metal band JINJER. A festival appearance at Germany’s Rockharz Open Air has already been confirmed too. NAILED TO OBSCURITY’s current 2019 tour itinerary can be found below.

Stated guitarist Jan-Ole Lamberti, “We can’t wait to get back on the road again and we are very excited to be a part of this killer tour package. We are looking forward to seeing familiar faces at cities and venues that we’ve already played in the past, but also to meeting lots of new people at places and even countries we haven’t been to yet. This is going to be great!”

For more than ten years, NAILED TO OBSCURITY from Northern Germany have successfully developed their distinctive style, somewhere between melodic death metal and doom with progressive influences. Their underground debut »Abyss…« exhibited these rare first glimmers, but their albums »Opaque« (2013) and last year’s »King Delusion« especially showed a real evolution within their sound, allowing the band to take some huge steps. Their melancholic songs never fall short of the necessary brutality, and always create a distinct dynamic which mesmerises the listener who profoundly experiences every note and every word. This magic has already won over the fans of festivals such as Wacken Open Air, Summer Breeze and Party.San Open Air as well as those who attended their tour throughout Europe as main support to DARK TRANQUILLITY plus their appearances alongside renowned acts such as ARCH ENEMY and PARADISE LOST.