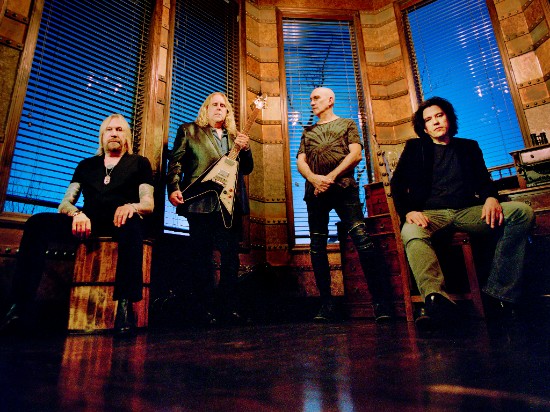 The band will be heading to Ireland to play a show in Dublin before coming to the UK for four dates in Edinburgh, Manchester, Cardiff and London.

After celebrating 20 years and then taking a few years to work on other projects, the album is “the new chapter opening up for the band”, according to founder Warren Haynes. It’s due for release June 9th via Spinefarm Records. You can pre-order the album here.

The 12-song set, Gov’t Mule’s 10th studio outing, was recorded primarily with long-time collaborator Gordie Johnson (Big Sugar) in Austin, Texas, but the musicians also worked on a pair of tracks with Don Was, with whom Haynes recently toured as part of the recent The Last Waltz 40th anniversary tour.

The record features the song ‘Dreams & Songs’, which Haynes deems autobiographical, reflecting on a career that started professionally with David Allan Coe‘s band in 1980 and has gone through the Dickey Betts Band, the Allman Brothers Band, the Dead, Phil Lesh & Friends and more.

“It’s about looking back at your life and family and changes,” Haynes explains, “and the general message is you never go back home — not in the literal sense of the word, but things have a way of growing in their own directions, and you wake up one day and look at everything you’ve been through and think, ‘Wow, how did I get here?’ It’s a journey and you look back on it. I’m very grateful for the opportunities that I’ve had, but it’s been a wild ride and in some ways has gone so much quicker than I would ever expect. Thankfully, I’m still going strong and my career’s as good as it’s ever been. I’m thankful for that.”