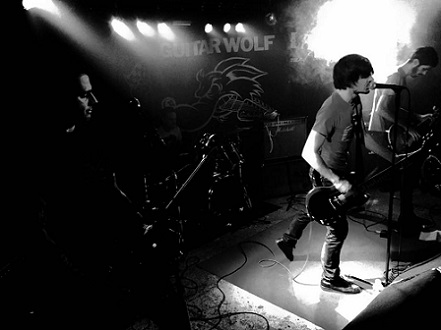 French speedrockers with a new album out
French Hard-Punk/Garage outfit influenced by 80’s hard-rock scene, UDDU released a few days ago its debut full-length album called ‘Hellcats’ for LP and Digital formats through the young Coup de Couteau label (Absded) for the physical edition (limited to 300 copies) and the main legal platforms such as iTunes, Deezer, Spotify.
In addition to the official release-news, the album is also available right now for entire streaming + Free Download on Bandcamp
Stream the full album on Bandcamp | Grab your 12″ Red LP copy on the labelwebstore

Funded in 2013 around the Montpellier (South of France) area, UDDU is a four-piece hardcore-punk unit with members from bands such as Captain Stark, Destroy Busters, Dust In Vegas which quickly recorded an EP called ‘Rawk & Rawl’ (2013) before to take the road and play some gigs as openers for bands such as Peter Pan Speedrock or Hard-Ons.

In 2016, the band released its first full-length record ‘Hellcats’ with the great help of the young French label Coup de Couteau