Your Mother Would Love It 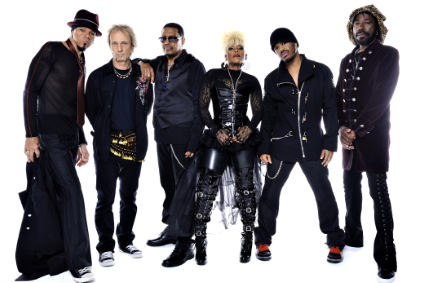 Mother’s Finest, who emerged from Atlanta, Georgia, in the early 1970’s, (long before The Red Hot Chili Peppers & Living Color), created the genre that fused funky, rock-solid grooves with an explosive power and high energy, in-your-face, virtuoso vocals. The Band’s earliest recognition came with three Epic / CBS albums, ‘Another Mother Further’ (1977), ‘Mother Factor’ (1978), and the much acclaimed ‘Mother’s Finest Live’ (1979), which all went gold in America and sold well in Europe & the UK.

In the summer of 1977 they opened for The Who on their laser lit tour of Canada, and for the remainder of the 1970’s, Mother’s Finest became known as the most dangerous opening act in rock, blowing away headliners like Aerosmith, Frank Marino & Mahogany Rush, and Ted Nugent. In 1978 over a million TV viewers witnessed the life-altering broadcast of their legendary Rockpalast performance in Germany, winning Mother’s Finest a massive cult status in Europe – which lasts until this day.

Mother’s Finest dabbled with dance music in the 1980’s, but then came back with the angry, hard rocking album ‘Black Radio Won’t Play This Record’ in 1992, which proved prophetic, despite being the band’s best for well over a decade.  The group continued to tour heavily, especially in Europe, but did not release another studio CD until 2003’s ‘Meta-Funk’n-Physical’, an experimental, hip hop and electronic beats-oriented effort.

Following Mother’s Finest induction into the Georgia Music Hall Of Fame in 2011, the musicians decided to return to their roots and began writing and working on what was to become the exuberant, incomparable rock experience that is ‘Goody 2 Shoes & The Filthy Beasts’.

Featuring virtuoso vocalist Joyce Kennedy at the epicentre of the glorious soundquake, a tighter-than-a-duck’s-arse rhythm section, masses of spirited, melodic guitar fusillades and many more musical hooks than you can shake a fist at, ‘Goody 2 Shoes & The Filthy Beasts’ heralds the welcome return of one of the most energetic and charismatic rock groups on the planet.

Previous article
Don’t Dream, It’s Not Over!
Next article
The Answer: Album and Tour News