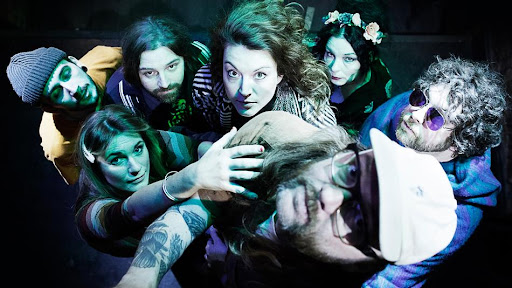 Coming a week before their prestigious SXSW slot – HEAVY SALAD – release the playful new single: “Joggers From Mossley To Malibu Beach”.
STREAM ON ALL SERVICES HERE || LISTEN ON SOUNDCLOUD HEREHeady and frolicking — and embracing the notion that life’s challenges are nothing but positive opportunities — “Joggers From Mossley To Malibu Beach” is a jovial new cut that comes just a week before Heavy Salad touchdown in Austin, Texas for an official showcase slot at SXSW.

Packed with playful rhythms, carefree “sha la la”‘s and a whimsical, vintage tinge, the track was produced and mixed by Stephen Street (The Smiths, Blur) and is plucked from the band’s forthcoming second record, ‘Long Wave,’ set for release later this year.
Brought to life when guitarist Rob Glennie noticed hoards of people out jogging as a way of coping with the initial COVID lockdown in his hometown of Mossley, frontman Lee Mann explains of the track:
“The story of “Joggers…” sees our protagonist embrace jogging as a means of getting out of the house, but their world is changed through what starts as a way of coping with the lockdown that then blossoms into the realisation that there’s a whole world out there! Their journey eventually leads them to a new life in California inspired by the song’s melodic, West Coast feel.”
And, for all its sunny melodies and Californian surfer-town twinges, the track includes several nods to the band’s hometown roots in the North of England. Name-dropping everywhere from Mossley and Malibu to Tameside and the Pacific Coast Highway, Heavy Salad manage to traverse geographical borders just as neatly as they do genres.
Merging 60s-inspired backing vocals with slacker-rock riffs that Pavement would be proud of, “Joggers…” uses its cheery sonic stylings to embrace a serendipitous and happy-go-lucky approach to the limitless possibilities that come with our seemingly mundane lives.
Expanding on the track’s back story, Mann adds:
“The song was also partly inspired by a chance encounter with a Venice Beach bike hire shop owner who it turned out was from Rotherham and originally lived in the same part of town as my in-laws. Having travelled to Brazil for Carnival in the 70s our bike hire shop owner had travelled to California on his way home and never actually made it home! The song is about the possibilities of life, to embrace changes, to see challenges as positive things and to embrace random opportunity in the short time you are alive.”
*****
“Joggers From Mossley To Malibu Beach” is the second eclectic glimpse into Heavy Salad’s forthcoming second album ‘Long Wave,’ set for release later this year. The follow-up to warmly received debut ‘Cult Casual’ was recorded between the band’s current base in Manchester and Damon Albarn‘s Studio 13 in West London, and saw Heavy Salad strike up a creative partnership with producer Stephen Street as well as Christophe Bride (A Certain Ratio). With Street weighing in on “Joggers…”‘s production, he is also confirmed to have worked on a number of other tracks across the record, as Lee Mann explains:
“Working with Stephen Street was a dream come true for Heavy Salad, he instantly recognised the band’s knack for a killer hook and a guitar player who does things differently! Having worked with some of the most distinctive guitarists in British rock, Stephen can now add Rob Glennie to his illustrious list of collaborators.”
“Joggers From Mossley To Malibu Beach” also sees Heavy Salad collaborate once more with acclaimed illustrator Stan Chow, who has previously drawn  a range of Northern icons including Andy Burnham and Maxine Peake. After inducting Heavy Salad into his Mancunian hall of fame with specially commissioned artwork for earlier single “Psilocyberman,” Chow has teamed up with the band once again to create “Joggers…”‘s psychedelic artwork.
With a prestigious showcase slot at SXSW in Austin, Texas next week and a UK headline tour in the pipeline on the band’s return, fans will be able to hear Heavy Salad previewing more new material at the following fixtures:
HEAVY SALAD – LIVE DATES

Formed in 2018 by Lee Mann (live bassist with The Moonlandingz), Rob Glennie and Allan Hutchison, Heavy Salad have since expanded to a seven-piece outfit, enlisting Ally McBoo, Esther Maylor, Lucy Hope (AKA The Priestesses) and Oscar Remers along the way. Bonding over a joint interest in psychedelic horror films, (Panos Cosmatos’ surreal classic ‘Mandy’ in particular), they loved the idea of being in a band like a psychedelic cult and thus Heavy Salad was born. The gang released their debut album ‘Cult Casual’ in 2020. A loose concept-album-of-sorts that explored the idea of finding your own reality in the modern world, ‘Cult Casual’ crystallised Heavy Salad’s natural flair for oddball melodies and psychedelic pop hooks. Drawing comparisons to The Flaming Lips, to The Beatles, to Super Furry Animals, the record aptly proved to be a cult-hit with fans and press alike, with Louder Than War praising: “Heavy Salad arrive on the scene with a glorious mix of all things psych, gospel, soul and all things funky with their spot on debut album”.
Preparing their second album for release in 2022, standby for further updates and new music in the coming months.
FOR MORE INFORMATIONTwitter: @HeavySaladSound //
Insta: https://www.instagram.com/heavysaladsounds/Facebook: https://www.facebook.com/heavysaladsounds