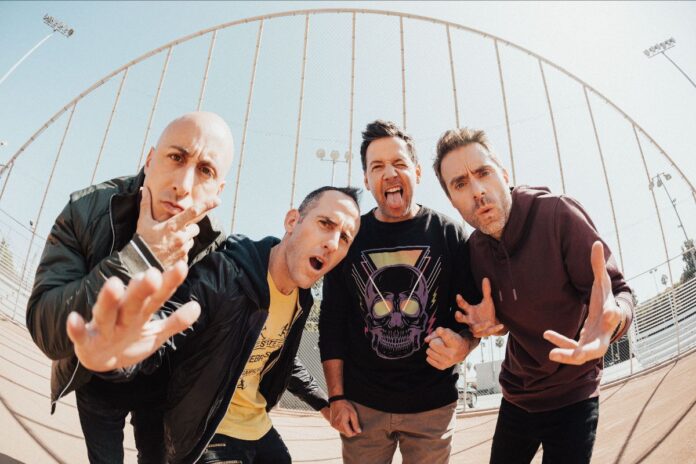 For the first time ever, Simple Plan have teamed up with Sum 41‘s Deryck Whibley on a brand new single. The two powerhouses have come together on the anthemic ‘Ruin My Life,’ out now and streaming here.

When it came time to write the song, it was a total no-brainer for the group to collaborate with a fellow Canadian musician that was part of the same generation of bands who helped shape the pop-punk scene of the early 2000s and make this style of music one of the most popular and influential cultural movement of the last 20 years. That sound is front and centre on Ruin My Life, especially the muted guitar riff propelling the song forward, the high impact drumming, the melodic vocals, and the overall energy that makes you want to get up and move.

“‘Ruin My Life’ is a song about overcoming adversity, going through a difficult life situation, and not only surviving it, but becoming an even stronger and more resilient version of yourself because of it,” the band shares. “It’s fun, catchy, energetic and empowering and we’re so excited to share it with our fans. Having Deryck from Sum 41 sing on it with us makes it even more special!”

‘Ruin My Life’ comes on the heels of Simple Plan’s recent single ‘The Antidote,’ which was released at the end of last year and has amassed millions of streams across platforms.

Simple Plan have remained an international sensation for over 20 years with worldwide sales topping 10 million and over 1 billion streams across all streaming platforms! February and March of this year also mark the 20th anniversary of Simple Plan’s debut album No Pads, No Helmets…Just Balls, which has recently gained attention on TikTok through the viral ‘I’m Just A Kid‘ challenge. The #ImJustAKid trend on Tik Tok has over 4.3 billion views. The song has inspired millions of videos, including Will Smith, Ed Sheeran, Usher, and more.

Fans can look forward to more new music, including a new album, later this year. Stay tuned for more information at www.officialsimpleplan.com.