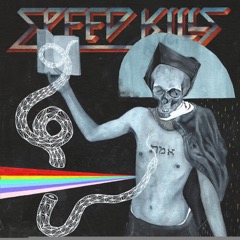 Legendary label revives legendary series
Between 1985 and 1992, the Speed Kills compilation series was a celebration of the best young thrash talent on offer featuring now legendary bands such as Metallica, Slayer, Megadeth, Venom, Bathory and Celtic Frost across 6 essential volumes.
Now 24 years later Music For Nations are set to bring back Speed Kills with Volume VII set for release on 2nd December featuring original artwork by Daniel P Carter and liner notes from legendary rock journalist Malcolm Dome.
If there were ever a compilation series of LPs that defined a genre then it was Speed Kills. Each release helped highlight some of the best metal bands from around the world and Volume VII will showcase the best of British extreme music featuring Acid Reign, The King is Blind, Formicarius, Amulet, Divine Chaos, Akerkocke, Dungeon, Voices, Desolator and Nine Covens.
Malcolm Dome explains more:
“Let’s begin with a band who link this album and its predecessor ‘Speed Kills VI: Violence Of The Slams’. The latter had a song from Acid Reign, and they’re here again, with ‘Plan of The Damned’.
East Anglia’s The King Is Blind dose upon Celtic Frost, Mercyful Fate and Emperor to give us the nascent nutjob ‘Throne Of Skulls’. Only formed in 2013, this lot are rowdy and…well. LOUDY!
Londoners Formicarius are immersed in blackness. As ‘Lake Of The Dead’ shows, they’re inherently part of the black metal heritage, but have an approach that takes the sound right back to its British roots.
Amulet also come from London, and as you’ll hear on ‘Highwayman’, this four-piece owe a lot to NWOBHM. The style and attitude has the bristling action packed peaking of bands like Trespass, Sledgehammer and James Raid from those golden days of 1979/80.
Slough’s Divine Chaos are certainly no slouches. The song ‘Ignorance Everlasting’ might begin with a misleadingly genteel intro, but soon opens into the type of thrusting, raging hymn that fits perfectly into the quintet’s philosophy of ‘blending the best elements of metal’ into their own music.
Akerkocke have a vast array of experience. The progressive blackened metallers started in London during 1997. They broke up in 2012, but returned with a new, revitalised line-up four years later. As you can hear on ‘Inner Sanctum’, this is a band not living on a past reputation, but fervently forging feral flashes into the modern metal era.
Dungeon are raw thrash mania – and proud of it. The London quartet attack, grind and maim with the sort of zeal and feel that brings to mind the early 1980s, when thrash was born. ‘Death From Above’ is a primal force overlaid with concussive musicianship. A full on facebutt.
Formed in 2012, Voices feature ex-members of Akerocke in their line-up. The style on ‘Petrograph’ links to Voivod, early Akerocke and My Dying Bride. It’s virulent yet also surprising sophisticated. A cool concoction to entertain.
Southampton trio Desolator started in 2010. And they rev up on the red line for ‘Full Power’. This is all action, moshing mania, with accelerating riffage and rampant rhythms, Stark, strafing snaggletooth sonicity.
The mysterious Nine Covens are a British band who keep the identity of their members under wraps. On ‘Through Fires Of Tyranny’, they create a heretical brew of black metal ire and brutally refined blood lust. A majestic paean to the dark forces of nature.”
Speed Kills Volume VII is avaialble to pre-order now –   http://www.underoneflag.co.uk/collections/mfn-catalogue
Tracklisting:
The King is Blind – Throne of Skulls
Formicarius – Lake of the Dead
Acid Reign – Plan of the Damned
Amulet – Highwayman (demo version)
Divine Chaos – Ignorance Everlasting
Akercocke – Inner Sanctum
Dungeon – Death From Above
Voices – Petrograph
Desolator – Full Power
Nine Covens – Through Fires of Tyranny
www.musicfornations.co.uk/ facebook.com/MusicForNations