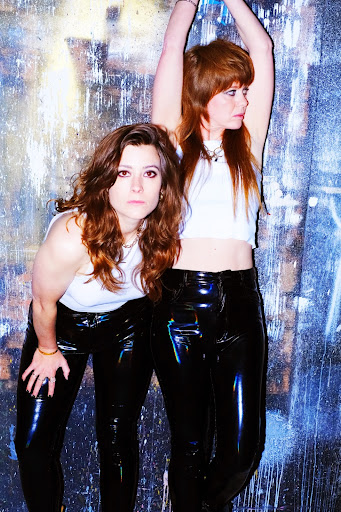 Today, riled-up rock duo THE PEARL HARTS are back with a bang with new single “More”, taken from their forthcoming second album ‘Love, Chaos’ due early next year.

A playful rock track laced with a satirical twist, “More” arrives as the first new music from The Pearl Harts since their 2019 EP ‘Suck It Up’. A rhythmic and rampant romp, it’s the sound of a band bursting back onto the scene with new energy, new frustrations and a renewed motivation to pave the way for women in rock music.

Blending strutting vocals with jagged guitars and pop-tinted grooves that bubble under the surface, The Pearl Harts‘ comeback is as sanguine as it is sardonic, and is driven by an unquenchable appetite… As the band explain:

“”More” is a sassy, sexy, post-ironic stab at the consuming world that we live in. One can be encouraged to ‘have more’, ‘do more’, ‘expect more’, ‘be more’. The amount of ‘more’ is overwhelming — it’s like a never-ending hamster wheel. Where does it end? Where is the satisfaction?… Interestingly, the point we observe is that the people who have the most always feel like they are entitled to “More”. Whereas those who generally feel like they need “More” are told they are too much.”

“More” arrives as the first single from the band’s newly announced second album ‘Love, Chaos‘, produced by the band themselves in collaboration with Danio (Husky Loops, Kari Faux). Featuring twelve tracks of the high-octane rock’n’roll The Pearl Harts have become known for, while adding some ’90s NYC punk, 2000s hip-hop and modern polished pop touches into the mix, the album is set for release early next year. Teasing the album, the duo say:

“‘Love, Chaos’ is about saying goodbye to unhealthy patterns that we all identify with in our lives. Be that work, alcohol, sex, drugs, procrastination, love… Whether we like it or not our whole lives are a series of patterns that shape our personality, they can come about through the unconscious, through family dynamics, through everyday interactions and through trauma. ‘Love, Chaos’ is about realising and accepting this and forging a life beyond.”

Not only reflecting on past experiences and the unhealthy habits that lie within all of us, ‘Love, Chaos’ sees The Pearl Harts on a mission to rewrite the narrative for women in the music industry and beyond. As the duo add:

“As women in rock’n’roll we have had to fight and unpick a load of history and patterns to accept ourselves as we are today. Shake off the ‘good girls’ we have been brought up to be’, not to become ‘bad’ but to become our real, true, authentic selves. We are starting a new conscious pattern of how we want to play rock’n’roll our way. We don’t just have to be hard, tough women. We can be sensitive ones too.”

Born out of love and a desire to make hi-octane rock, The Pearl Harts burst onto the scene almost a decade ago. Making a name for themselves with their wild attitude, DIY spirit and incredible live shows, the pair have been praised by the likes of NME (who praised the duo as having “an ear for dynamic riffs and gigantic tunes“) and Clash who lauded “The Pearl Harts have a visceral quality which is difficult to deny“. Garbage‘s Shirley Manson is also a certified fan, describing them as “badass girls with all the right stuff”.

With their music heard in hit shows such as the BBC‘s Peaky Blinders, The Pearl Harts have also received radio plays across the likes of BBC 6Music, Radio X, Scuzz TV and Kerrang!.

Having toured extensively across the UK and Europe with The Kills, Counterfeit, Frank Carter, Garbage and most recently False Heads, The Pearl Harts are now looking forward to a headline set of their own at London‘s Blondies on 24 November, where they will be previewing cuts from ‘Love, Chaos‘ ahead of release. Details below.