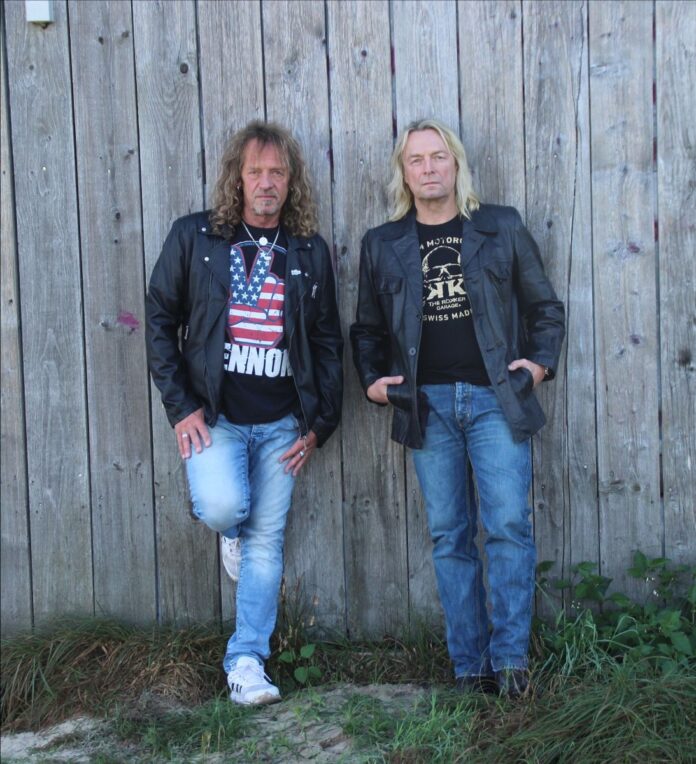 LESSMANN/VOSS — consisting of vocalists/multi-instrumentalists Claus Lessmann and Michael Voss (ex-CASANOVA, ex-MAD MAX; producer of acts such as Michael Schenker) — announced the release of their debut album »Rock Is Our Religion« for July 22nd, 2022 through Atomic Fire Records last month. After first single, ‘Smoke Without A Fire’ was very well received a few weeks ago, the duo are pleased to present another taster from the record in the form of ‘Take My Heart And Run’ today. Once again designed by Gabriel Management (http://www.gabrielmanagement.eu), the song’s lyric video is ready for watching over on YouTube: https://www.youtube.com/watch?v=pfXDKeqsNNY.

Lessmann states, “‘Take My Heart And Run’ is the very first song Michael and I ever wrote together, shortly after the »Point Blank« tour. I still have very good memories of that time: we’ve had an awesome time on tour and then we found out that the chemistry between us, when writing together, was just perfect – and it still is. We were especially proud when [Reinhold] Mack [producer of QUEEN, ELECTRIC LIGHT ORCHESTRA etc.] told us that he’s pretty excited about the track too. I still love this song a lot and I hope you like it too!”

Adds Voss, “I’ll never forget our recordings for this song in my children’s room that took place in 1990 I guess. I still lived at my parents’ home at that time. We used a Tascam 244 4-track cassette recorder and somehow synchronized it with a Korg M1 synthesizer. From the beginning, the song just got together easily… It was and remains one of my all-time favourites from this era and was produced by the aforementioned powerful sound wizard Mack. This tune includes all most important elements for a major hit single: love, pain and harmony.”

Pre-order the album in the physical format of your choice [CD-jewelcase, coloured vinyl; first edition incl. signed band photo card], pre-save it on your favorite streaming platform or pre-order it digitally to receive ‘Take My Heart And Run’  and ‘Smoke Without A Fire’ instantly now, here: https://lessmannvoss.afr.link/RockIsOurReligionPR.

Subscribe to Atomic Fire Records on YouTube & listen to ‘Take My Heart And Run’ and other new tracks in the »AFR New Releases« playlist on Spotify: https://afr.link/SpotifyNewReleasesPR.

More on »Rock Is Our Religion«:

Considering the two’s various collaborations – lately as members of PHANTOM V – spread over several decades,»Rock Is Our Religion« is way more than a debut: it’s rather a relevation, a bow down to genuine rock packed in 49 minutes of handmade music performed to the point. Lessmann and Voss complement each other over these 12 tracks as if they hadn’t done anything else before: from mysteriously starting opener ‘Medicine Man’ to lead single ‘Smoke Without A Fire’, the recording of ‘Take My Heart And Run’, circling back to one of their earlier songwriting cooperations in the ’90s, and the duo’s interpretation of AMERICA‘s 1975 hit song ‘Sister Golden Hair’, this album impressively shows that it still doesn’t need many frills to create impactful heavy music nowadays.

Previous article
FLIRT WITH DISASTER
Next article
NO LIES