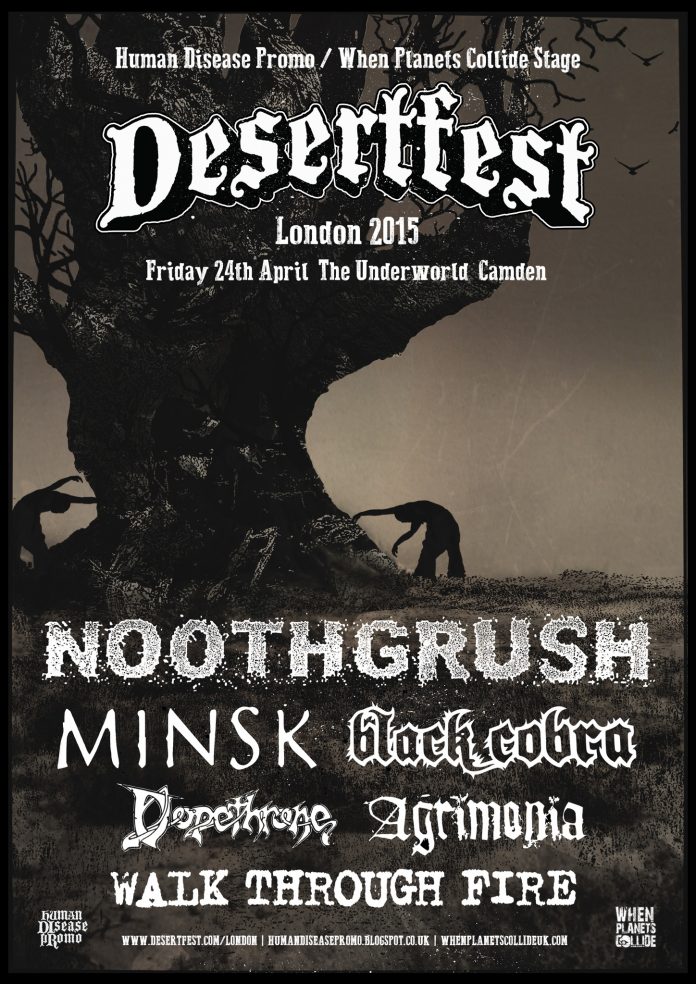 Who is following Orange Goblin and Sleep? These, that’s who!

Like every year, London promoters When Planet Collides and Human Disease Promo will be curating a stage at The Underworld, hosting some of the most crushing and bleak riffage on the whole festival. Let’s all welcome the mighty NOOTHGRUSH, MINSK, BLACK COBRA, DOPETHRONE, AGRIMONIA and WALK THROUGH FIRE at DESERTFEST LONDON 2015, taking place on April 24-26th in Camden.

For the fourth year running, Camden will be hosting one of the most exciting stoner/doom/sludge/psyche gatherings in Europe, for a full weekend of fuzzed-out tunes, psychedelia and partying. As the first headliner of this 2015 edition, American stoner rock pioneers SLEEP will be treating the Desertfest crowd to the finest smoked-out odysseys, with an exclusive headlining set at London’s famous venue Koko. Also headlining, Portland’s heavy rock’n’rollers RED FANG are set to turn this fourth edition into a massive metal celebration. The ground is set to tremble once again this year, with UK metal heavyweights ORANGE GOBLIN delivering their fiery metal anthems for a one-off 20th anniversary performance. It’s very rightfully than German psych foursome MY SLEEPING KARMA will be perfectly embodying the cosmic side of the lineup.

This new announcement with cult North-American outfits NOOTHGRUSH, MINSK, BLACK COBRA and DOPETHRONE, as well as Sweden based AGRIMONIA and WALK THROUGH FIRE is giving our 2015 lineup the blackened twist that is expected by all sludge and doom worshippers each year. Impending earthquake in Camden…

Tickets on sale now AT THIS LOCATION