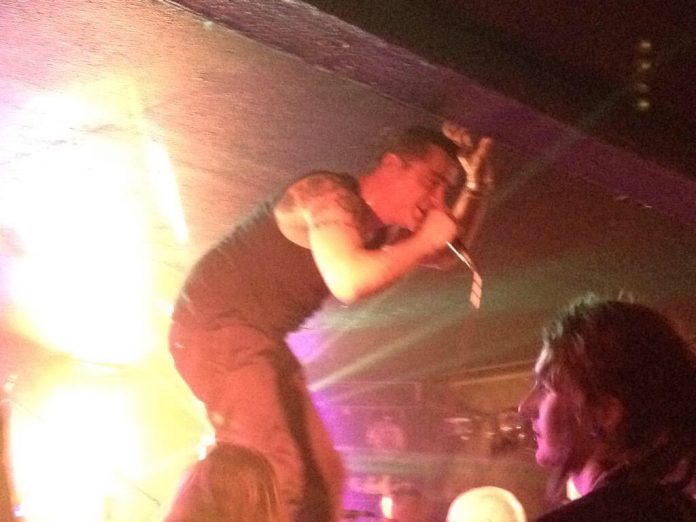 The genre lines get blurred in the home of metal

Portsmouth’s Seething Akira have a challenge. They reckon they can drink more than Birmingham. To be fair, they might have had a good idea on this as they’ve been round and met the crowd personally before the claim, as their pair of frontmen have shaken hands with the assembled throng as a preamble. There is a – it must be said – smallish crowd in the Asylum’s upstairs room tonight, so it’s not stretching the point to suggest that SA try to win the crowd over one by one as they won’t be bound by simple constraints like stages. Musically, it’s a kind of Enter Shakiri raving rock rumble that works best on “Backlash.” MV isn’t at many gigs where Katy Perry is covered and “Dark Horse” passes by a wall of electo – noise that at least the band enjoy. They seem like the type of guys that view this type of thing as a challenge and the single “Airstrike” flies at the speed of light, while the closing “Paralysed” is heavier and stripped away of much of the synth, making it rather more akin to the stuff MV usually watches. Hard working, energetic, instantly likeable and engaging people, In front of their own crowd Seething Akira might well hit home. Who won the drinking game is open to question.

The on-again, off-again, on-again, career of New York’s Mordred is very much, well, on-again. Last year’s tour proved that, and was so much fun they decided that they’d best do it all over again.

Mordred, back in the 1980’s, were a big deal for lots of reasons. Emerging at the zeitgeist of the whole funk rock explosion, of which Faith No More might be the most well-known but are far from the only – the collective were one of the first bands to open not just MV’s mind, but everyone else’s too, that rock and metal didn’t always have to conform to genre lines.

They are still here, still blurring the boundaries, but still heavy as hell. “State Of Mind” is best described as Anthrax gone funky and the soaring “The Strain” is a lost classic.

In between the old stuff the band showcase a sprinkling of new songs – easy going frontman Scott rather endearingly offers up that they are testing them to friends – and while they are all worthy editions to the canon, “Charlie” is a belter, although the aggressive “All Eyes On The Prize” isn’t far behind.

Just occasionally they slip it up a gear or two and “Spellbound” proves that if they had wanted to be a straight up, heads down thrash band, Mordred would have able to leave most in their slipstream. Mostly, though this is a set that views the melting pot as the place to work from and “Everyday’s A Holiday” – that staple of Beavis and Butthead – still sounds fresh as a daisy.

A band you can never quite pin down, “The Fragrance Of Vagrance” is soulful, “Severed Splice” by contrast is a horns-up blur, and that’s before DJ Pause has swapped the decks for a mic and delivered a full-on rap.

They also receive massive MV bonus points for worshipping at Thin Lizzy’s altar and a souped-up “Johnny The Fox Meets Jimmy The Weed, ” while “Falling Away” still has that huge hook in its kit bag.

That song would usually herald an encore. Not tonight, Mordred simply stay on stage and play “Reach” and “The Baroness,” the song that announced their comeback is worthy of that place in their history. The final song they play sums them up: “This Life.” “Make your own way in this life” it says, over a song that is part rap, part metal, part rock n roll and 100% excellent.

The word unique is overused to the point of cliche. Mordred are unique. That’s fact.