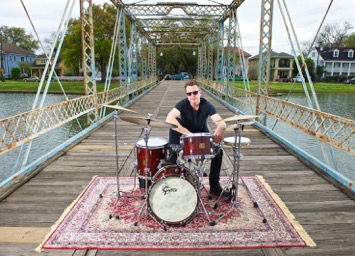 Stanton Moore is thrilled to announce his new album With You In Mind: The Songs of Allen Toussaint’ will be released on Cool Green Recordings / Mascot Label Group on 21st July 2017.

Besides his solo projects, studio and TV work, and teaching, he’s the drummer of Galactic, the funky New Orleans conglomeration now in its third decade of touring, and he still finds time to record and travel as a trio with David “Tork” Torkanowsky (keys) and James Singleton (bass).   Like Moore, Tork and Singleton are in high demand, so it takes some lead time to clear everybody’s schedule. They’re both first-call players with ridiculously long resumes and long apprenticeships under departed masters, both composers, both deeply rooted in New Orleans.

The trio had a new record ready, they thought. But then, “a couple of days before we were supposed to start recording,” says Moore, “Allen Toussaint passed.”

Toussaint’s sudden death on November 10, 2015 (in Madrid, far from home, of a heart attack, after playing a concert) shocked the city. The polymath New Orleans producer, songwriter, arranger, bandleader, pianist, singer, and all-around figure of elegance had been a vital, active presence in New Orleans since the 1950s.

The three musicians immediately shelved their planned album and went into creative hyperdrive. “We already had studio time booked, we couldn’t wait,” Moore recalls. “It’s not like we wrote out all these arrangements ahead of time. We were flying by the seat of our pants.”

As they began working up pieces of Toussaint’s vast repertoire, it quickly became a vocal album with guest singers. “As Tork likes to say,” Moore comments, “being a musician in New Orleans is like having the greatest musical toolbox at your disposal.” Supplementing their trio with some of New Orleans’s living legends – their friends — they reimagined Toussaint’s songs, conceptualizing and building out an album on the fly.

It was Torkanowsky who brought in the first guest vocalist, Jolynda Kiki Chapman, best known in New Orleans for singing with her mother, Topsy Chapman. She delivers perhaps the most straightforward performance on the album: Toussaint’s tender ballad “All These Things.” “The first time I heard her sing was when we were tracking,” Moore says.  “The hair on my arms stood up. I took it home and played it for my girlfriend and she burst into tears.” The record was under way.

New Orleans music doesn’t recognise genre boundaries, so With You In Mind crosses effortlessly from funk to jazz and back. Two of New Orleans’s most eminent jazz thinkers, Nicholas Payton and Donald Harrison, appear on two instrumentals. The first is a version of “Java,” which became a top-5 hit for Al Hirt in 1963 and the other is “Riverboat,”Toussaint’s 1960 record with Lee Dorsey (which also doubles as an homage to the session’s original drummer, one of Moore’s heroes, James Black).

They called in Cyril Neville to sing a song. “It turned into him singing four songs,” laughs Moore, “plus one as a spoken-word performance.” Neville kicks off the album with “Here Come the Girls,” with the added muscle of the musicians’ longtime colleague Trombone Shorty, the former child prodigy who is now a marquee attraction all over the world. Neville gamely sings one of Toussaint’s best-known numbers, “Life,” in 7/8 (James Singleton’s idea). Inspired by that, Moore put the 1969 Lee Dorsey classic “Everything I Do Gone Be Funky (From Now On)” into 5/4 (It was Tork, says Moore, who figured out how to make “fun-ky” line up on the 1). And Neville’s version of “Night People” features an alto solo by funk legend Maceo Parker.

But then they did something altogether new. “Tork said, ‘there’s this book of poetry that Allen wrote.‘ We got a copy from Reggie Toussaint, Allen’s son. It’s just a little thin book of poetry — a lot of it was different re-workings of some of his lyrics – but we found one, ‘The Beat,’ which he hadn’t recorded.” Cyril Neville pronounced the poetry virtuosically, with a characteristically funky musicality.

The album’s striking closer is another spoken-word number. Possibly the most experimental piece on the album, it’s also comfort music: a completely unexpected version of “Southern Nights,” a #1 hit in 1977 for Glen Campbell and a cornerstone of Toussaint’s own concerts. The catalyst for this number was Nicholas Payton, who’s doing compelling work these days in shows where he plays both trumpet and keys, sometimes at the same time.  And after it was recorded, Tork said, ‘what would be cool would be to get Wendell Pierce.’ “I was like, ‘uh, okay, I dunno.’ I thought it was a wacky idea at first, but it turned out to be a great idea.”

With You in Mind: The Songs of Allen Toussaint is built on the livest grooves the trio could deliver. It was a bittersweet project for all concerned, celebrating the memory of someone whose living presence was so important. “I didn’t get to work with Allen as often as I’d have liked to,” Moore says, “but I did get to.” Their friendship went back twenty years. “Through the years we crossed paths a few times. The first time he played with us was also the first time we played the Saenger Theater,” referring to the 2,600-seat New Orleans landmark.

“Allen Toussaint wrote the soundtrack to New Orleans,” says Moore. “He came out of an environment that no longer exists. The level of talent and ability and artistry that he embodied -– we won’t see this again.”

Previous article
Review : Nikka Costa – Nikka & Strings: Underneath and In Between (2017)
Next article
Rob The Back