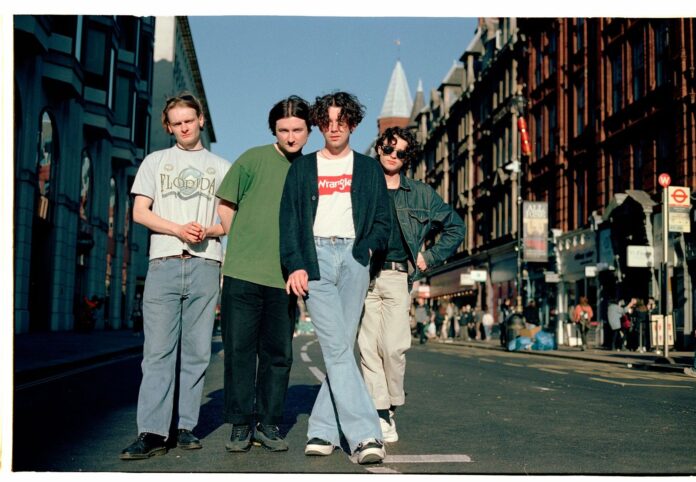 With larger than life indie-pop anthems born of small-town boredom, coming of age big nights out and young love gone wrong, modernlove. are becoming a bright new hope. They’ve already established an ever-growing following, resulting in much of their debut UK and Ireland November tour being extended with additional and upgraded shows, with many of them being sold out weeks or months in advance. Now modernlove. share their new single TAKE ME FAR AWAY.

The single sees modernlove. hurtling into bittersweet, arena-scale melodic punk without compromising their future-pop infectiousness and international ambition. It’s also indicative of their relatable storytelling, as vocalist and guitarist Barry Lally rages at the boredom and frustration of small-town life that leads many people to the bigger opportunities presented by the prospect of city life. The single was produced and mixed by Tom Leach (Lewis Capaldi, Col3trane).

The band explain: “The name of the song is sort of a dead giveaway for its subject matter. It’s about dealing with mental health struggles while also being stuck in the repetitive monotony of small-town life. It’s a feeling I think everyone can relate to, especially after covid. Every aspect of the song is just us venting our frustrations, from the lyrical content to the aggressive distortion of the guitar and bass. Hopefully people can take some comfort in knowing that they are not alone in feeling trapped in their own heads and there are always ways to feel better and escape.”

The video for Take Me Far Away matches the song’s electrifying energy, with footage of the band firing through the song in the studio. It was produced by the band’s regular visual collaborators Greasy Waffle Films.

The band are set to play their first European shows in October as guests to NEEVE before headlining Amsterdam Paradiso, and then they embark upon their debut UK and Ireland tour. Headline shows as follows:

Also featuring Graham Fagan (guitar) Daniel Rooney (bass) and Cian McCluskey (drums) modernlove. were formed in Drogheda near Dublin in 2016 by the four childhood friends. With no real music scene in their hometown the band inadvertently formed their own, as friends and then countless newcomers started to form a community around their tiny pub gigs.

Despite their local popularity, gaining attention from the wider industry seemed like a world away. But once lockdown hit, the band retreated to their bedrooms and spent their time writing a catalogue of new songs. And that’s the moment when one of their self-released demos was discovered by the London indie label Akira Records, who subsequently released their debut EP monochrome blue in 2021 before modernlove. upscaled their ambition with the Oh My Mind EP in 2022.

The diversity of the band’s influences stands tall throughout both collections, moving between the game-changing future-pop of The 1975 and The Japanese House, the new wave sounds of The Cure and New Order, the danceable indie of Bloc Party and Bombay Bicycle Club, the experimental ambience of Jon Hopkins and Aphex Twin, and a wealth of melodic pop punk. Their stories are snapshots of young people’s lives: partying, drinking too much, falling in love and the consequences that follow.