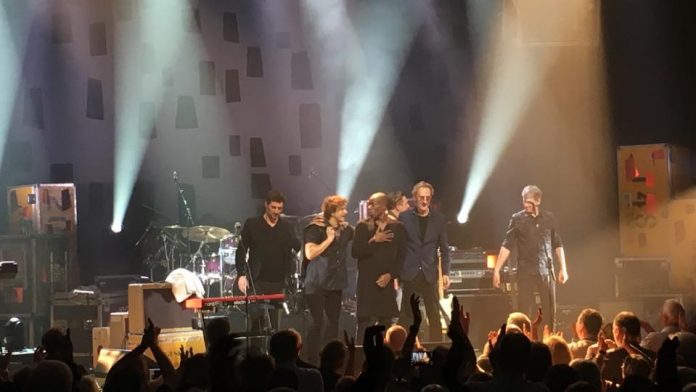 Garry catches Mike Rutherford’s merry men, who are very much in their living years still
It’s only been a couple of years since Mike Rutherford brought his superb band The Mechanics to the glorious surroundings of the Symphony Hall but in that time the band have recorded new music which will see the light of day on April 7th as we were reminded several times during the evening……most times in a very tongue in cheek manner.
The whole evening was a thoroughly enjoyable affair……and it was clear to see from the first note that the band were enjoying themselves as much as the sell out crowd in Birmingham, the setlist was a wonderful selection of classic Mechanics tracks, a couple of Genesis favourites and a handful of brand new songs which were incredibly well received…..I feel there will be many fans who will have pre-ordered the album by the time this review is posted.
Crowd favourites ‘Another Cup Of Coffee’, ‘Get Up’ & ‘Silent Running’ were played early on in the set which warmed the crowd up nicely before the band announced for the first time of many that they had a new album ‘Let Me Fly’ out on April 7th……the new material which included ‘The Best Was Yet To Come’ & ‘High Life’ didn’t sound at all stale which I find is usually the case when well established bands release their first original album in many years, this incarnation of The Mechanics which now has Andrew Roachford & Tim Howar at the helm seems to have found a fresh set of legs.
The inclusion of Genesis classic ‘Land Of Confusion’ into the setlist for this tour was greeted quite rightly with rapturous applause…..after all we may never see that band play live again, so any chance to dip into the Genesis back catalogue is always going to go down well with the crowd, The Mechanics track ‘Beggar On A Beach Of Gold’ was given the 2017 treatment with Tim Howar delivering a fine performance before handing over the vocal duties to Andrew Roachford to revisit the fantastic 1988 Roachford hit ‘Cuddly Toy’……and it was clear to see that the band thoroughly enjoy adding this track to the live set.
Genesis track ‘I Can’t Dance’ which is always well received plus Mechanics hits ‘Over My Shoulder’ & the superb ‘All I Need Is A Miracle’ are the the last three tracks of the main set and has the crowd up on their feet and singing along…..the Symphony Hall is hard to beat when the crowd are belting the lyrics back to the band…..the hall seems take on a life of its own in these moments as the voices come from all corners of this fantastic venue.
The encore opened with the anthemic ‘The Living Years’…….which along with ‘Drive’ by The Cars and ‘I Want To Know What Love Is’ by Foreigner is right up there as one of the greatest Rock ballads of all time…..a genius piece of songwriting which clearly means so much to so many people who share the sentiment of the track, then it’s time for the last track of the evening ‘Word Of Mouth’…..a song I’ll be totally honest I’ve never been a fan of as a studio recording…..but it just works perfectly in the live arena, Tim Howar gets the crowd joining in with the some excitable directional waving which gives the song extra energy before the whole band get a chance to show off their party pieces at the end of the show.
Two years ago I thought Mike & The Mechanics were fabulous here at the Symphony Hall but with the addition of new material I felt the show last night was absolutely brilliant and by the reaction of the crowd everyone thought the same too……
The band seem to have found a new lease of life.
Unchained: Tuesday’s 10pm-Midnight
Prog Rock Files: Thursday’s 10pm-Midnight
101.8WCR FM and online at wcrfm.com