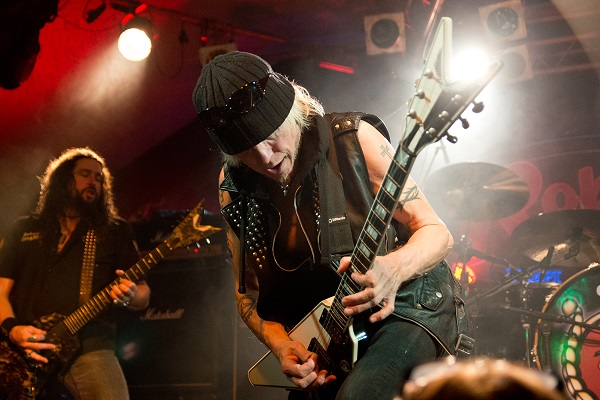 Ex Scorpions and UFO man brings his Temple Of Rock to the Black Country. Complete with added sea shanties

Western Sand say they are a Southern influenced band looking to put rock n roll in the south of England on the map. There have been statements written with less truth in than that one. When they trekked around the country at about this time last year with Black Star Riders, Western Sand gave notice they were a quartet to watch, now they are older, more road tested and have a new EP out called “Cut You Down To Size.” They play it’s title track about halfway through to their set tonight and it’s groove laden hook puts WS squarely in between Thunder and Thin Lizzy. Elsewhere – notably on “Badlands,” – they make good on frontman Tyler Hains claim to be influenced by Zakk Wylde’s southern rock gods Pride And Glory. Closing track “Nothing To Lose” boasts a double guitar ending which fair old screams out of the speakers with an ebullience that you can’t fake, apt for a band that evidently means every note. The huge raft of superb young Hard Rock groups in England right now has just swelled by one more.

When a gig starts with “Doctor Doctor” it’s normally the cue that Iron Maiden are five minutes away. Tonight, though, that’s exactly what Michael Schenker does – and this most fantastic of songs immediately almost dares you not to revel in it’s glory.

After the historical beginning it’s bang up to date as “Where The Wild Winds Blow” from the recent “Bridge The Gap” record, but fittingly perhaps for a guy with the back catalogue Schenker has, there is a huge amount of nostalgia here. Good thing, then, that there is a huge amount to like about songs such as “Armed And Ready.”

As he told MVM the other week Schenker has a superb band around him and singer Doogie White is the perfect foil for that distinctive guitar wail – and it’s abundantly clear that everyone concerned is enjoying themselves here. Not least among the contented is the six stringer himself, playing in the low slung gait that he has adopted throughout his career, he looks happy and healthy – and good lord he can still play that thang like very few before or since, as he proves beyond doubt on “Victim Of Illusion.”

Much of his career is represented here, and there is a double sting of Scorpions with “Lovedrive” being followed by “Coast To Coast” as the guitarist again stretches his wings to wonderful effect.

Also in that interview with MVM Schenker spoke of his “return to rock” saying that he felt like a standard bearer for his generation. With that in mind “Before The Devil Knows You’re Dead” dedicated to the fallen heroes like Ronnie James Dio, Jon Lord and Gary Moore perhaps takes on greater significance to the band. “Lord Of The Lost And Lonely” described by White as a “sea shanty” lifts the mood with it’s feelgood intent.

That, with one notable exception, signifies the end of the new stuff as UFO and Scorpions dominate – “Shoot Shoot” and “Rock You Like A Hurricane” in particular impressive. But it is that exception that really intrigues. “Vigilante Man” from an album that is being released next year, and which Schenker is claiming takes things for Temple Of Rock to the next level, is a superb song with a real classic vibe which hints that he may be telling the truth.

Though the set has changed a little from last year there are certain things that an artist like Schenker, who has been around so long, just has to play. “Too Hot To Handle” and “Rock Bottom” (which ends the main set) probably come into that category, “Lights Out,” which starts the encore, definitely does. But there’s a reason these songs and the men playing them – including another couple of former Scorpions in Herman Rarebell on drums and Francis Buckholz on bass, plus multi-instrumentalist Wayne Findlay – have endured this long: they quite simply are exceptionally good.

White had explained to the near-enough sold out crowd earlier in the evening that The Robin 2 holds a special place for him as it was the first venue in which he had sung with Michael Schenker. Now, given that everyone is saying that Temple Of Rock are a band in their own right and Schenker has said he will continue to play as long as there are fans to watch him, we can probably look forward to what are fast becoming annual events continuing. As the strains of “Blackout” bring this particular congregation of Temple Of Rock to a close, the prospect of such regular gatherings is most welcome. Even after all this time there is still something pretty special about the connection between Michael Schenker and his guitar.