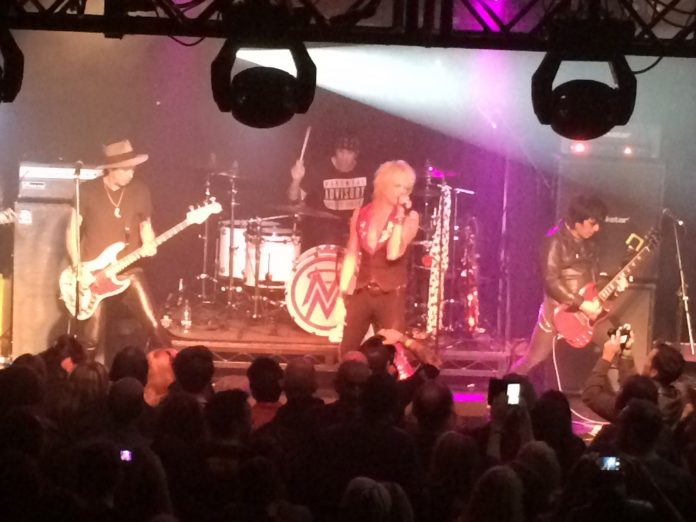 Death, incarceration or music were his only options, but the glam King still ain’t faking it

Israel isn’t the first place you think of when you think of what used to be called “Hair Metal” but now you have to call “Sleaze”. But if Tel Aviv has a Sunset Strip, Chase The Ace were in the Rainbow Bar And Grill there. Motley and Ratt-isms abound, but that’s not a bad thing, they even turn Credence’s “Fortunate Son” into a swaggering bar room brawl. The four piece give off the air of a band that wants nothing more to get drunk and play loud, which most certainly means they are perfect as openers here. When they play their own tunes, “Raise Your Glass” and the bluesy “Hell Yeah” (the title track of their next album) are as simple and effective as the titles suggest. The party atmosphere they generate sees two massive balloons arrive on stage for the last tune and the feeling is that Chase The Ace are here for, as another song said once, Nothin’ But A Good Time.

Speaking of which when Hardcore Superstar singer Jocke Berg asks if we want to have fun tonight, he probably knows the answer. Good time rock n roll has been the stock in trade of the Swedes for years. The key to HS’s enduring popularity and skill is that they never try and be anything they aren’t. Essentially if you drew the identikit glam rock band it’d be these boys. There’s just the right balance between make up and leather, groove and gritted teeth to make songs like “Need No Company” and “Touch The Sky” a notch above the generic and “Bully” is so aggressive that it would most likely see to the miscreant with a broken bottle. Given the opportunity for a full-length set by the co-headline nature here, they afford themselves an acoustic section and an encore, after a suitably snotty “Don’t Mean Shit” ends the main set. Like some cross between Skid Row and Faster Pussycat, Hardcore Superstar are at their best with hedonistic anthems like “Moonshine”. There’s just enough danger about tracks like “Last Call For Alcohol” (during which the band down shots, naturally) to live up to the Hardcore element to their name and this is dirty old school rock n roll in the best way. Carefree and totally unselfconscious, this music is all about Friday nights, because as they say themselves “We Don’t Celebrate Sunday’s”. As if to prove that this is all tongue in cheek (and wherever else you could stick a tongue too) drummer Adde has his kit removed piece by piece in the closing fists in the air moments of “Above The Law” and this has been all rather glorious.

But the thing is this: neither of the other bands here would be doing what they do but for Michael Monroe. You know when people say the word “legend” so often it means nothing? Well, brother, this is one. Living and breathing and still doing it. Right here. Right now. And he ain’t trading on past glories either. Listen to his new album “Blackout States” and tell anyone he’s coasting.

Then watch him as he flounces out, looking every inch the rock star, about 30 seconds after his stellar band (including half of the New York Dolls and a Misfit amongst others), races through “78” and is off and – literally- running.

With the aforementioned “……States” out today, it would be remiss not to play some, and many of its best moments get an airing, “Old Kings Road” is a belting good timer, “This Ain’t A Love Song” is even better and “R.L.F” is a potty mouthed rabble rouser.

It’s interesting that Monroe seems to know he’s in a purple patch. The set, which is a breakneck affair cramming in a ridiculous amount of material into its 75 minutes, is heavy on solo songs, and light on Hanoi material (although “Motorvatin'” is a sleazy diversion) but it’s more than that, much of the material comes from these last three records, and “Ballad Of The Lower East Side” from the previous “Horns And Halos” album is given the full Pogues meets the Pistols treatment here.

There’s also a wonderful couple of tracks from the vastly underrated Demolition 23. “Hammersmith Palais” and the Cheap Trick-like “Nothin’s Alright” – which forms part of the encore – are anthemic.

In between this concoction, which lies between a maelstrom and a motherlode, comes “Dead, Jail And Rock And Roll,” which sounds as magnificent today as its done for 25 years, ends the main set. Indeed, only once does the intensity dip. The choice to end with Johnny Thunders’ “I Wanna Be Loved” is odd anyway. That it becomes a jam is even stranger.

For the rest of this, though, there was a real excitement of not knowing was going to happen. As a frontman Monroe remains electric – and judging by the way he dealt with security when they tried to hold him as he was stood atop the monitors – firey too. He still seems to put everything into these live performances.

That’s probably because, as he says himself onstage: “You can’t download this. Live is all I got these days.” And my how he proved it here.