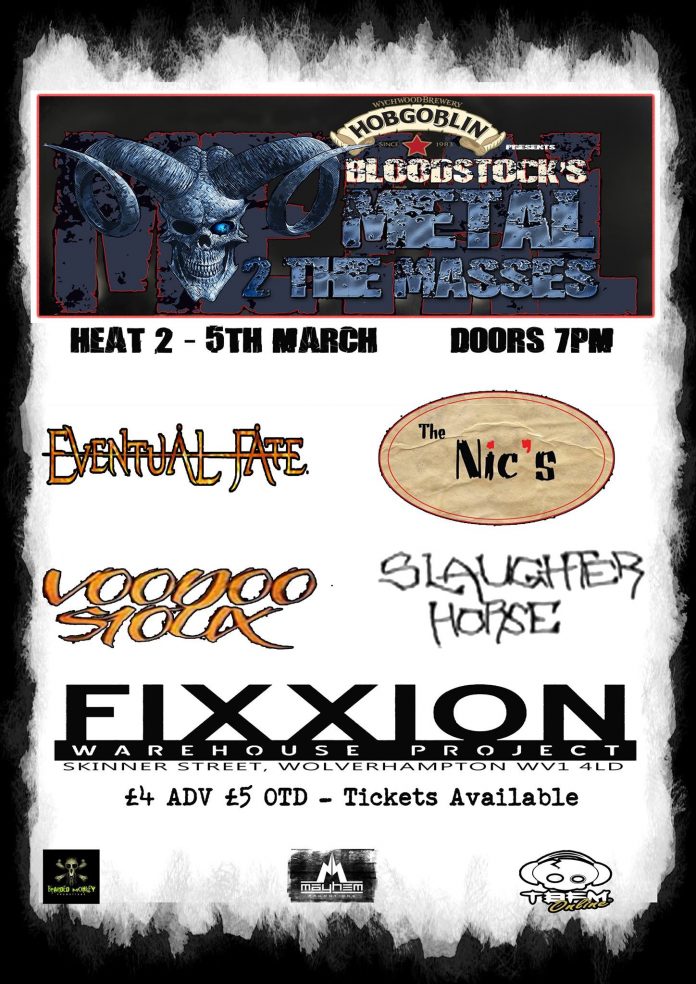 Continuing our in-depth look at all the heats, with the second one.

After the astonishingly varied nature of heat one, heat two of Metal To The Masses promises more thrills and spills.

With the order to be decided on the night and 50% of the vote going to the audience YOU can make a difference and send your favourite into the final!

Tonight you can choose from these four bands.

Eventual Fate are a fast rising heavy rock band from The Potteries. The 5 piece outfit from Stoke on Trent deliver a blend of good old 80’s metal with modern tones, piercing vocals and haunting nu-metal riffs. Formed in late 2013 by guitarist Steve Upperton, the band have gone from strength to strength.

The Nics are a band from Walsall, who make what they term: “sweet, glorious rock.” The Nics are looking to bring their unique mix of anything that rocks to as many people as possible. The band reached the 2012 regional showcase of the Surface Festival.

Voodoo Sioux are probably the most outrageous band on display in Heat Two. The Black Country based mob were last seen by MV supporting Michael Monroe a year or so back and frontman Nikki Flaherty donned quite the head dress for the occasion.

Slaughter Horse, in their own words are a powerful creature of Beauty and Bile. Majesty and Malevolence. Honor and Hatred. Expressed through compositions carefully thought out to warp the sane and tame the twisted. Relentless power through music.

We just say: they are ace. We saw them live a few months ago and were very, very impressed.

Previous article
Exclusive Streams From Legends Of The Desert
Next article
Bitch Queens: Kill Your Friends